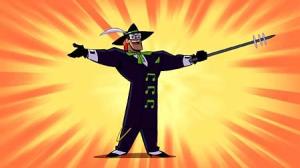 Neil Patrick Harris voiced the DC Comics villain in the Batman: The Brave and the Bold animated series — and thus has been speculated/hoped to assume the live-action role — The Music Meister has not yet been cast, Berlanti said.

CW president Mark Pedowitz told TVLine on Sunday morning that he was just about to see the script for the musical two-parter, adding: “We’re very excited about it. There’s great musical talent on both shows,” including but not at all limited to series leads/Glee alumni Melissa Benoist and Grant Gustin.

Want scoop on any show? Email insideline@tvline.com and your question may be answered via Matt’s Inside Line.