Nathaniel, who makes his debut this Friday (The CW, 9/8c) in the second of two all-new episodes, enters Rebecca’s orbit when his dad’s prestigious L.A. law firm buys a stake in Whitefeather & Associates — which makes him Rebecca’s new boss. TVLine went to the Crazy Ex-Girlfriend set to get the scoop on Nathaniel’s arrival… and to see whether there are any sparks between him and Rebecca.

“He’s very Darwinian,” showrunner Aline Brosh McKenna says of Nathaniel. His hyper-efficient, no-nonsense approach to work means that he “clashes with Rebecca right away, who’s all about emotion and leaves work whenever she feels like it. And he wants to run that place like a really tight ship.” But that doesn’t mean Rebecca’s not still interested in him, star Rachel Bloom adds: “He kind of treats her like garbage, which is what she’s attracted to.” 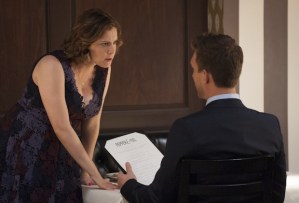 That attraction doesn’t go both ways, though… at least not at first. “[Rebecca] thinks, ‘Oh, we must have some banter going, because I’m a cute girl and you’re a cute guy,'” McKenna says. “But right away, he says to her, ‘I’m not interested in you.'” Nathaniel’s more interested in cutting the dead weight at Whitefeather and immediately threatens layoffs, which puts Rebecca’s fellow employees on edge. “The rest of the firm is kind of terrified by him,” Bloom hints.

So an aggressive he-man captain of industry from an ultra-wealthy family… sound like anyone we know? “It is very Trump-y,” Bloom admits. “This alpha male comes in and threatens to start firing people… which is literally what Donald Trump does!” Plus, Bloom hints that Nathaniel’s rich-boy privilege stirs up bad memories of Rebecca’s former life: “It’s kind of everything she tried to escape in New York — this quest for status, money and career above everything else — coming back to haunt her and really mess with her.” 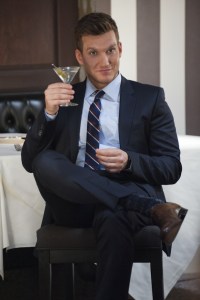 Foster has a past with Crazy Ex-Girlfriend, too, as it turns out: He originally auditioned for the role of Greg when the pilot was being cast. And he’s remained a fan ever since, he says. “It’s such a fantastic show. Honestly, I was trying to be really selective this year about what I wanted to do. And this one was like a no-brainer.” Still, he admits the show’s musical-comedy numbers were daunting: “I haven’t done any sort of actual singing since I was in high school.” But he embraced it as a challenge: “It was like, ‘It scares me a little bit. So I’d like to do that.’ The song and dance aspect… it just felt like another muscle I was able to stretch.”

He didn’t need to be scared, though; McKenna says he fit in perfectly with the cast from the start. “It was one of the most undeniable auditions we’ve ever had for any part,” she remembers. “He just so perfectly embodied the kind of crisp, cold, emotionless [guy], but with this sort of soulfulness and intelligence and slight brokenness… which all of the characters on our show have.” Plus, his good looks didn’t hurt. “He’s very handsome in an almost cartoony way,” she adds. “And so we have a lot of fun making fun of that.”

Another fun aspect of Nathaniel’s arrival: his unique perspective on Josh Chan. Yeah, he’s not as awed by West Covina’s golden boy as the rest of the town is. “The people in West Covina are charmed by Josh, and see him as the popular guy from high school,” McKenna hints. “But that’s not how he strikes Nathaniel at all.” Hmmm… we smell a Josh-vs.-Nathaniel feud brewing, possibly in a battle for Rebecca’s affections. And Rebecca wouldn’t hate that, we’re guessing.

Does Scott Michael Foster seem like a good addition to the Crazy Ex cast? Share your first impressions in the comments.