There are about a million ways that The CW’s Riverdale — a slick new reboot of the classic Archie comics — could’ve gone horribly wrong. (See: NBC’s Emerald City.) And yet the new year is full of surprises, because Riverdale (premiering Thursday, Jan. 26 at 9/8c) actually turns out to be an artfully crafted, instantly engaging teen soap with loads of potential.

It’s an unexpected revival, to be sure, because the original comic-book hi-jinks of 1950s teens Archie, Betty, Veronica and Jughead are about as dated as sock hops and chocolate malts. But the Archie comics have been given a 21st-century revamp in recent years, proving that the franchise draws on strong archetypes that still resonate: The All-American boy. The girl next door. The rich girl. The nerd. And Riverdale cleverly uses those archetypes as a jumping-off point to tell a freshly compelling — and darker than expected — story. 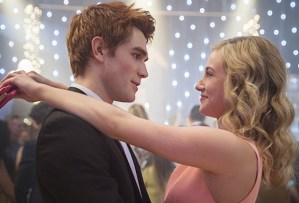 Riverdale‘s Archie (K.J. Apa) is a football player blossoming into a hunk — as one character observes, “he’s got abs now!” — with dreams of being a musician. Betty (Lili Reinhart) is Archie’s best friend… and wants to be more than that. But the arrival of new classmate Veronica (Camila Mendes) makes for a juicy love triangle. Well, rectangle, if you count Miss Grundy (Sarah Habel), the music teacher Archie had a steamy summer fling with. And then there’s the mysterious death of local golden boy Jason Blossom… (In this post-Pretty Little Liars world, of course somebody ends up dead.)

The Archie universe offers Riverdale a wealth of characters to work with, but creator Roberto Aguirre-Sacasa (Supergirl, Glee) wisely keeps what serves his story and gets rid of the rest. (Betty’s gay best friend Kevin, played by Casey Cott, is a nice addition to the usual gang.) And the dialogue feels current, thanks to a sharply self-aware sense of humor: Archie is referred to as “Justin Gingerlake” at one point, and Jason’s head-cheerleader twin sister Cheryl (Madelaine Petsch) is a rich source of bitchy quips.

The young cast of newcomers is convincing throughout, especially Reinhart as Betty, the Adderall-popping overachiever who’s tired of being the “nice girl” all the time. And the adult cast is filled with familiar faces, led by 90210 alum Luke Perry — who knows a thing or two about being a TV teen idol — as Archie’s grizzled dad Fred, and Twin Peaks‘ Mädchen Amick as Betty’s domineering mom Alice. The decision to make Jughead (Cole Sprouse) a sarcastic recluse who’s estranged from his pal Archie doesn’t quite work, at least not early on. But his role as world-weary narrator has room to grow as the show’s mysteries deepen.

And yes, that’s “mysteries,” plural: What happened to Betty’s institutionalized sister Polly, who used to date Jason? Why is Veronica’s dad Hiram in legal trouble, and what’s with the fat bag of cash he left for Veronica’s mom? Was Jason murdered? And if so, whodunnit? Riverdale‘s pilot expertly sets up a number of tantalizing plot threads for the writers to tug on all season long.

But the main plot thread, of course, is the love triangle between Archie, Betty and Veronica. If that doesn’t work, the whole operation falls apart. But it does work, thanks to the trio of young actors, and the show is smart to make Betty and Veronica more than just love rivals. The added intrigue of Archie’s affair with Miss Grundy is admittedly a little creepy — he’s only a sophomore! — but then again, it’s meant to be creepy. Riverdale revels in exposing the dark underbelly of this suburban utopia, adding a sinister undertone of secrets, lies and murder. (It even looks ominous; it’s like there’s a perpetual layer of fog hanging over the town of Riverdale.)

It’s a real high-wire act, blending teen soap, a murder mystery, biting humor and a beloved franchise. But Aguirre-Sacasa and uber-producer Greg Berlanti (who, with NBC’s Blindspot and The CW’s superhero lineup, seemingly has the magic touch these days) manage it all in surprisingly nimble fashion. In fact, the show Riverdale reminds me of the most is The O.C. — another show that took a seemingly worn-out teen-soap formula and reenergized it to create something altogether new… and addictive.

THE TVLINE BOTTOM LINE: Riverdale updates the classic Archie comics with surprising skill, offering a sharp wit and a wealth of mysteries to solve.