First, a confession: I know way too much about these women. Over the past decade, I’ve watched more episodes of Bravo’s Real Housewives franchise than I feel comfortable admitting in mixed company. But all that guilty-pleasure viewing gives me the authority to say this: 2016 was the worst year in the franchise’s history… and I fear that it’s all downhill from here.

Don’t get me wrong: Andy Cohen and Bravo have built an impressive empire out of filming a bunch of rich women drinking wine and sniping at each other. A good Real Housewives season is a nice, brainless respite from TV’s super-serious dramas, and can be funnier than most sitcoms. (In an alternate universe, Ramona Singer has won multiple Emmys for best supporting actress in a comedy.) But this year — of all years! — I couldn’t even turn to The Real Housewives for relief, as nearly every show in the franchise seemed to be running on fumes and grasping for storylines.

Currently, we have seven (!) Real Housewives shows airing on Bravo — and that’s not even counting Melbourne and Cheshire, which air first internationally. Let’s go through each one to get a better sense of what’s gone wrong: 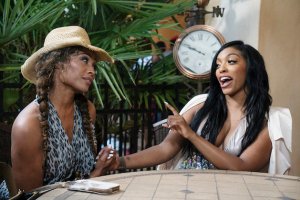 * Atlanta has always been the most volatile (and highest-rated) of the bunch. But now, two seasons into the post-NeNe wilderness, RHOA is a bit lost. They’re dragging back old news like “She By” Shereé Whitfield and introducing Kandi’s absentee baby daddy, all in a futile effort to stir the pot. And the less said about last season’s Kim Fields experiment (which extended into early 2016), the better.

* Orange County is the longest-running Housewives edition, with an astounding 11 seasons under its belt. (Vicki Gunvalson has been on TV longer than Ted Danson at this point.) It’s also maybe the most reliably entertaining of the bunch, but this past season, with the addition of foul-mouthed hothead Kelly Dodd, was an ugly misfire. 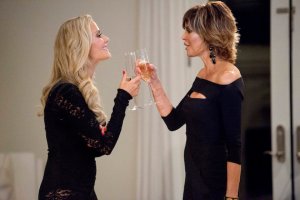 * Beverly Hills, once a highlight — where have you gone, Camille Grammer? — is now a shell of its former self, fruitlessly shuffling new cast members around Lisa Vanderpump and Kyle Richards and hoping for a spark. Lisa Rinna’s desperation for airtime is painful to watch, and even the addition of the endearingly brash Erika Girardi (Erika Jayne, if you’re nasty) hasn’t made RHOBH watchable again.

* New Jersey: Oof. I have to admit, I tuned out on this one a few seasons ago, so maybe I missed it getting great again, but of all the versions, this one burnt out the most quickly. Teresa Giudice’s imprisonment should’ve been manna from reality-TV heaven, but instead, it just sucked all the fun out of the show. RHONJ introduced three new housewives last season… and then got rid of all of them this season! That’s not a promising sign. 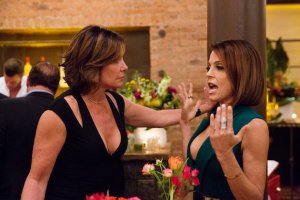 Now to be fair, there is one (faint) bright spot in the Real Housewives lineup. New York City clearly had the strongest season of any installment this year, with the juicy drama over Countess LuAnn’s whirlwind engagement to “my Tom.” Bethenny Frankel is the gift that keeps on giving to RHONY viewers, and Ramona and Sonja still deliver the laughs. But like the other shows, it’s relying too heavily on longtime cast members and not replenishing with new blood. (Jules “The Asian Jew” Wainstein was a big-time miss this year.)

And it’s not just the quality of these shows that’s dipped; the ratings are sinking, too. Here’s a quick look at the five longest-running Real Housewives shows, comparing their series-high viewership to their highest rating this season:

As you can see, all five editions are suffering significant, double-digit viewership losses, with New Jersey pulling just half of what it did in its prime. Based on these numbers, it looks like this franchise peaked somewhere in the 2010-2012 range, with diminishing returns ever since. Of course, all five of these shows have been on the air for at least seven seasons, and run 20-plus episodes each season, so maybe it’s not a mystery why they’re all running out of gas. (Even the ultra-trashy RHOBH offshoot Vanderpump Rules is showing its age in Season 5.)

In an effort to refresh the lineup, Bravo did roll out two all-new Real Housewives shows in 2016: Potomac and Dallas. But neither made much of a dent in the pop-culture conversation. I watched and enjoyed the Potomac ladies; they actually may have had the second-best season of the year, behind RHONY. But I skipped Dallas, and didn’t hear anything online that made me regret that decision. Bottom line: Neither of the two new entries will be the savior that resurrects this franchise.

So what’s the answer? Cut down on the episode count — and the interminable three-part reunions — and tighten up the ship? Ditch the old casts and start fresh? (That can be a perilous road, as we’ve seen.) Find a new city? (They’re tried that.) Or just accept the inevitable decline, and enjoy the Chardonnay-soaked laughs while we can?

Even Andy Cohen seems to recognize that the end may be approaching. In multiple interviews this year, the former Bravo executive who helped launch the franchise has mused about doing a Real Housewives All-Stars season: “When they really start petering out, we’ll just throw eight of them on an island.” Two thoughts on that: One, I would definitely watch a season of Ramona, NeNe, Kim Richards and Teresa stuck on a deserted island somewhere. And two, if what Andy says is true… that season might be a reality sooner than we think.

Real Housewives fans: Do you agree that the franchise is running out of steam? Hit the comments and give us your take.