To a greater degree than in previous years, ABC’s Agents of S.H.I.E.L.D. has changed horses midseason, wrapping up one distinct arc to segue into a quite different one.

Or has Ghost Rider not been extinguished completely?

As suggested during the midseason finale, “He is trapped in another place,” co-showrunner Jed Whedon noted during a recent set visit, “which usually means that he’s not dead.”

The Marvel series instead bid Robbie Reyes adieu, for the time being at least, lest it stretch a good idea too far. “[Ghost Rider is] a lot for 22 [episodes], especially with everything else that we like and care about on the show,” said EP Jeffrey Bell. “It would feel like one flavor over a long period of time, but we’ve certainly left it open” to revisit.

The producers also admitted that “financial considerations” played a role in snuffing Ghost Rider’s flame. After all, telling the story of LMDs (or Life Model Decoys), as played by Mallory Jansen and now Ming-Na Wen, “doesn’t cost as much” as setting a guy’s head on fire via CGI, Bell quipped.

As for switching gears barely a third of the way into Season 4, “We want everything to feel like its own mini world, and to have its own flavor,” Whedon said. “So we do think you’ll come into the next section [of episodes] and immediately feel like, ‘Oh, this is a different kind of story.’ So we’re excited about that.” 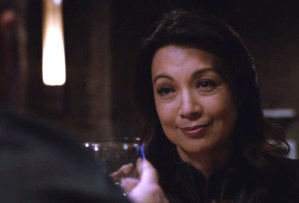 that Agent Melinda May has been abducted by Dr. Radcliffe’s LMD assistant, Aida, and replaced with an android lookalike, will offer a fresh wrinkle on S.H.I.E.L.D.’s longheld pattern of trust issues. “Trust is always an issue in a spy organization. But it’s much worse when you don’t know if the person next to you is the person next to you,” Whedon noted. “We want to not just tell scare stories of things popping out of closets, but the emotional stories — and when you get into trust, that’s when things get emotional.”

When Agents of S.H.I.E.L.D. returns on Jan. 10, with the episode “Broken Promises,” Coulson and “May” will continue to grow closer, while Aida is unrelenting in her search for the Darkhold, the mysterious tome that easily corrupts human minds and seemed to set Radcliffe’s assistant on her new, secret path. The Darkhold thus serves as the connective tissue between the first and second arcs of this season.

“In the same way that Radcliffe allowed Aida to read the book to get [Coulson, Fitz and Robbie] back, by building these quantum sort of things, it makes sense then that she can make other adjustments,” Bell said. “It seems to us that that’s part of the same story.”

Added Whedon, “We can go on a different journey, but we are still playing in the same world [as Ghost Rider], and these things could link up later in some way — maybe in thrilling fashion.” (With reporting by Scott Huver)