No, nope and definitely nyet, but I sure hope you’ll allow — or at least not condemn — my co-opting of an Andrew Lloyd Webber lyric as I recap The Voice‘s Season 11 performance finale.

Because while it’s my best guess that the Maroon 5 front-man’s remaining team members will bring up the rear of Tuesday’s season finale (8/7c on NBC), it’s not like third- and fourth-place finishes are anything to be ashamed about. Fellow coach Miley Cyrus didn’t even advance to the finale — and she had R&B wonder woman Ali Caldwell* on her team! (* #NeverForget)

Also bear in mind that when it comes to The Voice, my internal predictive machinery proves incorrect as often as it does right. I mean, maybe America is really throwing its weight behind Billy Gilman, a technically gorgeous, emotionally murky male vocalist who apparently wants to bring Celine Dion-sized balladeering to the pop charts?

I think not. I hope not. But this is one of those Voice seasons where the process has zoomed by so quickly and my personal faves have been steamrolled so promptly that I entered the Monday-night episode without a real favorite.

To my ears, Sundance Head grabbed that ball of ambivalence from my arms tonight and sprinted directly for the end zone — that’s how sports works, right? — and I’ll be flabbergasted (intellectually) and bummed out (emotionally) if he doesn’t claim the top prize.

On that note, check out my reviews for the Season 11 performance finale, then hit the comments and tell us who you think deserves to take home the whole enchilada. 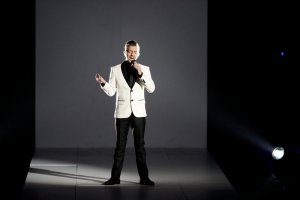 Cover Song
Billy Gilman (Team Adam), “My Way” — Grade: B | Credit where it’s due, I’m not sure Billy hit a single bum note in the night’s opening performance. But to my eyes and ears, the entire affair was so cloyingly choreographed — from the nod of the head on the a capella opening verse to the dewy-eyed voice break on the closing line — that it left me colder than a Vermont mountaintop in the middle of January. Look, if Billy’s your bottle of distilled artisinal springwater, by all means, drink up! I just think a win by him would be a triumph of training, technique and carefully constructed artifice over the real and the raw.

Original Single
Josh Gallagher (Team Adam), “Pick Any Small Town” — Grade: C | Josh’s original — which he penned with fellow contestant Nolan Neal and a second Nashville-based writer — was catchy enough, even if 90 percent of its lyrics sounded like they came directly from The Encyclopedia of Country Music Clichés. Despite the fact that he’d crafted this ditty to fit his own limited range, though, He Who Had His Black Baseball Cap Surgically Attached to His Noggin went flat on a number of extended notes, saw his pitch get shaky on the bridge and never really found a spot to soar. The fact that Blake’s critique didn’t mention Josh’s actual vocal was verrrry interesting.

Duet With Coach
Wé McDonald (Team Alicia), “Ave Maria” — Grade: C | I’m not sure if I’m grading Wé fairly here, because in her defense, it had to be really challenging to get her vocal bearings in a duet where her coach was hitting maybe one out of every four notes. (Sorry, Alicia, “Fallin,” “You Don’t Know My Name” and “Empire State of Mind” are modern classics, but just be thankful you’re not getting graded on this one!) There were a few moments where Wé’s opera training kicked in and she was able to shine, but the closing harmonies were more cacophonous than a yellow school bus packed with four-year-olds who’ve just consumed all the sugar.

Original Single
Sundance Head (Team Blake), “Darlin’ Don’t Go” — Grade: A | OK, if this is the kind of self-penned ditty Sundance plans to bring to radio, then he might just turn out to be The Voice‘s No. 1 post-show export (even if he did cut his teeth back on American Idol in Season 6). As he pleaded with his woman that he’d never do her wrong again, Sundance’s voice showcased palpable desperation as well as the Gospel fervor of a preacher testifying the way, the truth and the light (if that makes any sense). Better still, the bearded Texan pivoted from monster belted notes to spoken-word interludes and back again without the slightest difficulty. Dude’s got a list of skills almost as long as his trademark beard!

Duet With Coach
Billy Gilman (Team Adam), “Bye Bye Love” — Grade: B | This was a perfectly fine little duet, but an odd choice for a finale — given that the Everly Brothers chestnut is not only super repetitive, but pretty far outside the type of pop music Billy’s been saying he wants to produce in the future.

Original Single
Wé McDonald (Team Alicia), “Wishes” — Grade: B | All season long, Wé’s secret weapon has been her glorious, rumbling lower register, but somehow, her original single didn’t fully take advantage of that space. And while she did a nice job of connecting with the lyrics about a young girl fighting for her dreams, her pitch got a little rocky on the bridge — meaning the teenager was lucky this wasn’t her closing number. 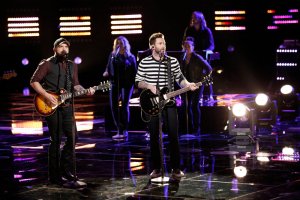 Duet With Coach
Josh Gallagher (Team Adam), “Smooth” — Grade: C+ | If you had any doubt Adam was putting all his eggs in the Billy Gilman basket, look no further than this duet choice, which — stylistically and range-wise — fit Josh about as naturally as a floral easter bonnet on Blake Shelton’s head.

Duet With Coach
Sundance Head (Team Blake), “Treat Her Right” — Grade: B+ | The night’s most strategically brilliant and surprisingly emotional song choice found Sundance covering his father Roy’s rollicking 1965 hit — with black and white footage of daddy dearest in the background, a kicky line of period-costumed dancers on display and the coach and contestant blending better and having more fun than any other duo on the evening. Roy’s tearful response from the stands was the proverbial cherry on top.

Cover Song
Josh Gallagher (Team Adam), “Jack and Diane” — Grade: C | Adam served up a pretty perfect song choice for Josh — everybody knows/likes “Jack and Diane,” but if my memory serves, it’s never been done on a reality singing competition in the U.S. — but despite its limited range, Josh veered severely out of tune in the latter stages. That botched glory note to close things out just reminded me what might’ve been had Ali Caldwell or even Brendan Fletcher snagged last week’s fourth finale berth.

Cover Song
Sundance Head (Team Blake), “At Last” — Grade: B | Sundance sounded just a wee bit shaky on the upper register of this Etta James hit — and, strangely, went from fourth and last in the performance order to second. (Conspiracy theorists, discuss!) But while this was perhaps my least favorite of the Team Blake standout’s trio of finale performances, I respected the fact that he once again eschewed pure karaoke and instead boldly put a doo-woppy spin on it. And there was certainly no lack of I’m-gonna-sing-the-hide-off-this gusto in the dude’s delivery, either. If he doesn’t win the season, he might still wind up winning over the country audience.

Cover Song
Billy Gilman (Team Adam), “Because of Me” — Grade: B | Adam handed Billy a song that was originally intended for Maroon 5, and I understood not only why he thought it might fit his protége, but also why he didn’t keep it for himself. On the plus side, the modern midtempo vibe and obsessively passionate lyrics painted Billy as a vocalist who might have some radio relevance with the right material. But on the downside, Billy went unexpectedly sharp on the verse, and the peculiar backdrop — did I see a wolf’s eyes pop up in the foreground, or was it a Mucinex-induced fever dream? — was ultimately more memorable than the melody. 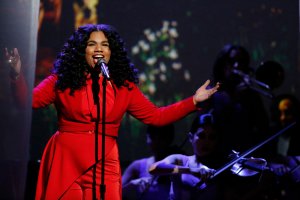 Cover Song
Wé McDonald (Team Alicia), “Don’t Rain on My Parade” — Grade: A- | It’s no secret exec producer Mark Burnett likes a feel-good Voice story arc that begins with a four-chair turn in the Blind Auditions, features an undeniable coach-contestant connection and ends with a triumphant closing number in the performance finale that results in a shower of sparks and confetti the next evening. Which is why I won’t be shocked by Wé winning over Sundance — even though he’s been arguably more consistent and had more “moments” than his younger rival. “Don’t Rain on My Parade” showcased Wé’s wicked range, her girlish effervescence, and a beyond-her-years confidence that probably has Ryan Murphy daydreaming about a Glee continuation starring the Team Alicia standout. As Wé climbed higher and higher from the bridge and into the chorus like Tara Lipinski landing multiple jumps in a row to seal the Olympic gold, it wasn’t hard to imagine her at the top of the podium come Tuesday — even if I still contend it’s Sundance who belongs there.

How did you feel about The Voice‘s Season 11 performance finale? Who was best? And who’s going home? Sound off below!