Spoiler alert: This article contains major reveals from Sunday’s Secrets and Lies finale. Like Kate Warner on the edge of a building, you should think carefully about your next move.

Confession: I really didn’t suspect Amanda of killing Kate. Prior to that bomb being dropped on Sunday’s Secrets and Lies season finale, my money was still on Eric’s dad, who’s apparently had a secret family all these years.

TVLine spoke with executive producer Barbie Kligman about the finale’s many twists (who got shot?!), as well as what we can expect from a potential third season:

Let’s start with the big reveal: Kate was killed, albeit accidentally, by Amanda! Learning that Kate got pregnant so easily — especially after Amanda’s own infertility issues cost her a marriage — sent Amanda into a jealous rage, complete with Kermit-level arm flailing. As for Amanda learning she was also pregnant, that’s something Kligman calls “delicious irony,” putting it under the category of “men plan and God laughs.”

Still, Kligman says that not all hope is lost for the Warners to repair their broken family. “I see the hope through Eric and Patrick, and through Eric and Charlie, Kate’s son,” she says. “This week’s Cornell Confidential webisode takes place after Patrick gets out of jail. You find out that Eric kept in touch with him, and that Eric did adopt Amanda’s baby. He’s got a whole new life. He’s a daddy, he’s raising Amanda’s little girl, and he and Patrick are going to be OK. … As for the others, Amanda is obviously still in the doghouse, and their father’s betrayal was also just too big.”

Now, let’s talk about Cornell for a minute. Kligman acknowledges that it was important for her to actually put the right person behind bars this season because “you can only have your brilliant cop screw up so many times before you have people go, ‘Wait a minute!’ … One of the complaints we got from fans last season was that we left the cliffhanger on the ‘A’ story, but by virtue of our show [being an anthology series], you really have to do the cliffhanger with a character who’s actually going to be back in the next season.” 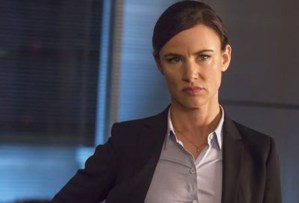 Ah, yes, that cliffhanger. Kligman won’t say a word about Cornell’s fate, but she digs my theory that Cornell could end up being the victim of a potential third season: “There’s a world where that could happen,” she says. “The season would be about exploring all of the people who could have done it. And given how many enemies Cornell has made over the years, there certainly wouldn’t be a shortage of suspects.”

What she is willing to say about a potential third season is that it would be told “just as much from the prospective of the police solving the case as it would from the perspective of the potential suspect. … We would show enough of the cops that you would get to see more of [Cornell’s] day-to-day with her colleagues and supervisors.”

As for the likelihood of the series continuing, Kligman says, “It really just depends on where ABC is and what the numbers are.”

OK, time to talk back: Which finale reveal surprised you the most? Are you crossing your fingers for a third season renewal? Grade the episode below, then drop a comment with your every thought.