Andrew Sachs, who played Manuel on the classic British sitcom Fawlty Towers, has died. He was 86 years old.

Sachs died Nov. 23 after a four-year battle with dementia, according to his wife Melody, and was buried on Thursday. The Daily Mail first reported the news. 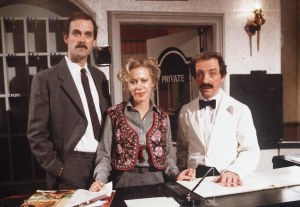 Sachs starred alongside John Cleese on Towers, playing the bumbling Spanish waiter Manuel at a quaint English hotel owned by Cleese’s Basil Fawlty. Towers only ran for a dozen episodes in 1975 and 1979, but still stands as one of the most beloved comedies in British TV history.

Cleese remembered Sachs in a series of tweets on Thursday: “A very sweet gentle and kind man and a truly great farceur. I first saw him on stage in Habeus Corpus in 1973. I could not have found a better Manuel.”

Sachs also appeared on the long-running British soap Coronation Street and played Albert Einstein in a 1996 installment of PBS’s Nova. Plus, he’s a part of the Doctor Who universe: Sachs voiced the Dronoid criminal Skagra in Shada, an unaired season of Who that was eventually produced as an audio play.