So you’ve already watched all six hours of Netflix’s Gilmore Girls revival, and you’re starting to experience symptoms of withdrawal — like you haven’t had your usual six cups of coffee yet. (Don’t worry: We’re right there with you.)

Luckily, the stars of A Year in the Life — Lauren Graham (Lorelai), Alexis Bledel (Rory), Kelly Bishop (Emily) and Scott Patterson (Luke) — sat down with Vulture’s Gazelle Emami in New York on Tuesday night to ease our withdrawals and look back on the experience of returning to Stars Hollow nearly a decade after the original series ended.

Now since some audience members hadn’t seen all four episodes yet — what’s wrong with these people? — the cast didn’t get into any spoilers, so your burning questions about those last four words will have to wait. But the actors did discuss the experience of slipping back into their old roles, the most emotional scenes to shoot, and the fan backlash to Rory’s treatment of poor Paul. (Who?) 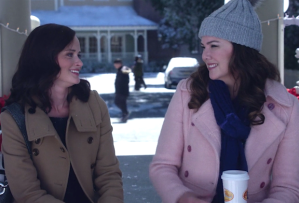 * Graham said she was filled with conflicting emotions as she prepared to play Lorelai Gilmore again: “It was the same, but totally different. Everywhere we went, people were excited… which put a different pressure on it, too.” But the overriding emotion, she said, was gratitude: “Mostly, it felt like an opportunity to go back to something and just appreciate it.”

* Bledel was frankly taken aback when she saw how messy Rory’s life was as the new episodes picked up: “I really wanted her to have had some great rewards, or to have enjoyed quite an interesting life… I wanted her to be on top of the world, so to learn that we pick up with her scrambling… I just had to imagine that for her.” She later added that creator Amy Sherman-Palladino probably wanted to inject some conflict into Rory’s existence: “I think Amy just didn’t want her life to be wrapped up in a bow.”

* So why were Lorelai and Rory so mean to Rory’s forgettable boyfriend Paul? Graham brushed off any talk of online backlash: “We don’t pay attention to anything. None of us are on the Internet.” She defended the running joke at Paul’s expense: “The whole show has a heightened, theatrical quality. Just like Donald Trump, don’t take it literally. Does it go ten steps too far? I don’t know.” Patterson chimed in to add: “Paul was the sacrificial lamb, and he knew it.”

* Bishop (who, it should be noted, got a rousing round of applause from the crowd) seemed confused by the audience’s affection for Emily Gilmore: “I’ve always been baffled by that. I’ve always enjoyed playing what I call the nasty, rich women. Because I can’t stand them. So I try to make them as awful as possible.” She did find something nice to say about Emily, though: “She is funny… if you don’t have to live with her.”

* When asked about the most emotional scenes to shoot in the revival, Patterson picked the scene in “Fall” when Lorelai returns to Luke after her Wild excursion. “It was so fraught with tension,” he remembered, “and I just started to bawl my eyes out. That was the most impactful scene that Luke’s ever been involved in. It might be the most impactful scene I’ve ever done.” But the waterworks didn’t really work for Sherman-Palladino, who directed the episode. As Patterson remembers, “Amy says, ‘Cut. Scott, that’s really not what we want to do…'”

* The loss of co-star Edward Herrmann (Richard) was deeply felt on the set of A Year in the Life, and Bledel recalled how great he was to work with: “We’d have those long Friday night dinner scenes, and he would share so much. He was such a generous actor.” Bishop added that she believes Herrmann really would’ve enjoyed being a part of this revival: “I thought, ‘He would’ve loved to have done this. He would’ve relished this.'”