Warning: This post contains spoilers about a certain character in Netflix’s Gilmore Girls: A Year in the Life. Don’t read on if you don’t want to know.

One of the most shocking revelations contained within Netflix’s Gilmore Girls revival: Emily Gilmore actually found a maid she likes!

On the original series, Emily ran through maids faster than Murphy Brown ran through secretaries. But in A Year in the Life, she keeps the cheerful, ever-smiling Berta in her employ for an entire year — even bringing her along when she moved to Nantucket. (This, despite the fact that Berta doesn’t seem to speak a word of English. Or any other known language, for that matter.)

But did you notice who played Berta? We didn’t give it a thought on our first viewing, but sources confirm to TVLine that the role of Berta was actually played by… Rose Abdoo, who plays surly car mechanic Gypsy! 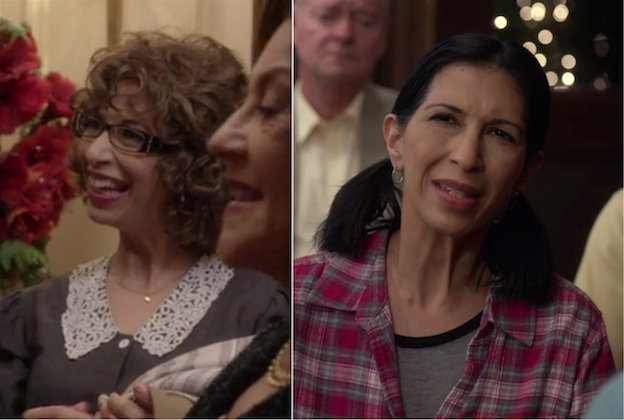 Abdoo (also seen on Bunheads and Parenthood) has played Gypsy since Season 2, so her double role here is a great little Easter egg for die-hard Gilmore fans. And it brings a nice sense of connection between Stars Hollow and Emily’s Hartford home. We know Emily doesn’t like setting foot in Stars Hollow… but in a strange way, Stars Hollow came to her.

Series star Lauren Graham has since chimed in about how Abdoo landed the part:

Rose read it for fun in a table read because they hadn't cast it yet, and she was so hilarious they had to double her up! https://t.co/tnfAhHOZIp

Did you know that was Rose Abdoo underneath the Berta wig and accent? Hit the comments and tell us how surprised you were to find out.