The following contains spoilers from the final “Fall” chapter of Gilmore Girls: A Year in the Life. Proceed with an abundance of caution.

TV fans got two revivals for the price of one while watching the “Fall” episode of Gilmore Girls: A Year in the Life. Within the first 30 minutes of the climactic chapter, Lauren Graham’s Lorelai — in the midst of a Wild-esque personal retreat — has separate run-ins with two park rangers, played by her former Parenthood co-stars Peter Krause and Jason Ritter. 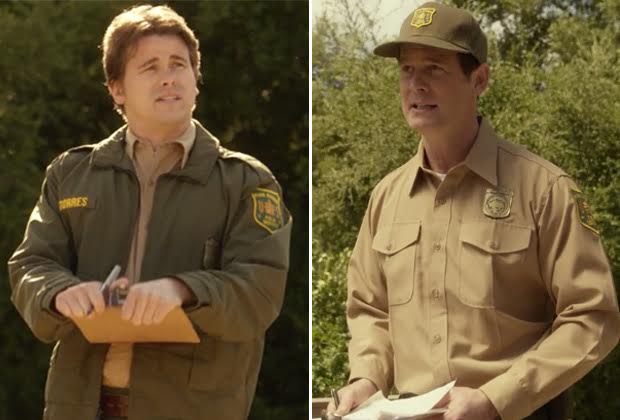 TVLine spoke to both actors about how their hush-hush cameos cameo about:

Graham personally wrangled both actors for the gig | “Lauren came home one day and said, ‘Would you like to play a Park Ranger?'” Krause recalls. “And I said, ‘Can I take a look at [the script]?’ She said, ‘Come one. Just do it.’ And I said, ‘When I was a kid I always wanted to be a park ranger so… sure. Cool.'” Ritter’s invite, meanwhile, came via a text from Graham.

Krause and Ritter shot their scenes on the same day, although the former was on borrowed time | “I was under the gun time-wise because I needed to go back across town to resume shooting The Catch,” he explains of the ABC drama in which he currently stars. “It was the first time in my career where I filmed two TV series in one day.” Krause was around long enough to partake in what Ritter calls “a nice little high-five moment,” adding, “It was like a little Parenthood reunion.”

Ritter struggled to get into character | “The hardest part, really, was not being charmed by Lauren,” he confesses. “She’s one of the most charming people in the world playing one of the most charming characters in the world. And she’s stumbling around and I have to be like, ‘You’re taking up my time!'” Ritter adds that he was “initially terrified” about his Gilmore stint, likening it to “your first day first day of school and I’m the new kid and they’re gonna beat me up or find me out. But it was so much fun.”