On Thursday, Pompeo shared an email she received from Rhimes, in which the Grey’s boss lauded the actress — as well as co-stars Kevin McKidd, Jerrika Hinton and James Pickens Jr. — for their work in Thursday’s artsy outing. (We’re guessing the fifth recipient of the email was exec producer Debbie Allen, who helmed the “bottle episode” in question.)

“Just a note to let you all know how beautiful I think tonight’s episode of Grey’s Anatomy is,” Rhimes gushed. “The performances you all gave, the work you clearly put in, the choices, the direction, everything — it’s spectacular. Truly truly.”

The change-of-pace episode revolved around a single surgery performed by Pompeo’s Meredith, Pickens’ Richard, McKidd’s Owen and Hinton’s Stephanie and was punctuated by a series of flashbacks.

Check out Rhimes’ full email below: 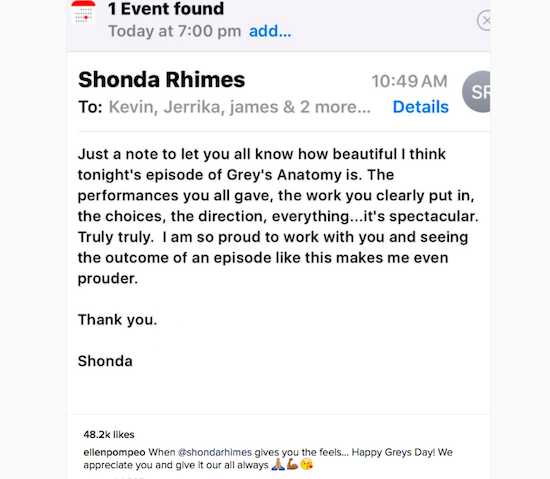