After weeks of lurking in Star City’s shadows, Prometheus finally lands on Team Arrow‘s radar this Wednesday (The CW, 8/7c) when the Big Bad’s killing spree leads Oliver & Co. to make some startling discoveries about their latest foe.

“We begin to explore why Prometheus is doing what he’s doing,” Stephen Amell shared during TVLine’s visit to the series’ set in Vancouver. To that end, “We actually have to go back in our story, which is interesting and something that I’m very proud that we’re doing in a fifth season. We’re calling back to a lot of familiar parts of our early days in the show.” 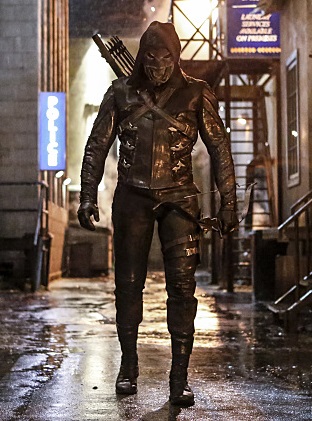 As the team attempts to make sense of Prometheus’ actions, Felicity and Curtis learn that his victims have a mysterious tie to Green Arrow’s past. In fact, “he and Oliver have a lot in common,” co-star David Ramsey teases.

That revelation could upend the already fragile dynamic between Oliver and his new recruits. “You’ll see just how the team members react to what Prometheus’ goal is,” Echo Kellum says, noting that the responses from Curtis, Evelyn, Rene and Rory are “varied.”

Meanwhile, Dig is the calm and confident voice of reason when it comes to figuring out how to deal with the new villain.

“He’s the guy you can count on to cut straight to the chase,” Ramsey describes. “Oliver’s the one that kind of struggles with, ‘Oh, well, maybe this. Maybe that.’ Diggle’s always the one that’s like, ‘Listen, he’s a criminal. We need to take him out. Don’t necessarily kill him, but he needs to go.’ … So his reaction to Prometheus is the same as it was with [Damien] Darhk, the same as it was with all our other villains: He needs to be taken out, that simple.”

“I do think that it would’ve been a missed opportunity in the last year of these flashbacks to not have a really worthy adversary, and we’ve found that in Dolph, which is why he’ll be around for a while,” Amell says. “It’s been a blast to work with him.”