Ahhh. It all seems so simple now.

Appearing Friday on CBS’ The Late Show, The Price Is Right host Drew Carey fielded some burning questions from Stephen Colbert’s TPIR-addicted pals in the graphics department — including the biggest mystery of all: Where best to release the Plinko chip, to wind up in the primo $10,000 slot? 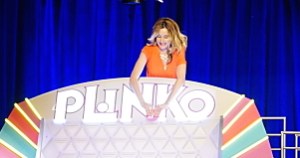 As you hit PLAY on the video above, we’ve included a handy photo of the Plinko board for you to eyeball, as Carey shares his inside intel on (possibly) mastering that vexing game.

Carey also gave The Late Show‘s graphics gurus some insight as to just how hard it is to spin The Big Wheel (and why little old ladies have an advantage), as well as revealed whether his, um, little yodeler has ever been injured by a contestant’s overenthusiastic embrace.