Chicago Med‘s Dr. Sarah Reese comes to the aid of sex-trafficking victim Danny in this Thursday’s episode (NBC, 9/8c), but Reese may need to be rescued herself when she gets overly invested in her patient.

“It seems like a common mistake for a rookie to make, to not know where to set the boundary line, especially when you’re delving into another person’s mind to help [them],” star Rachel DiPillo says.

Feeling sympathetic to Danny’s plight, Dr. Reese enlists the support of Dr. Charles, who has strong feelings about his mentee’s course of treatment.

“It’s a very complicated thing, because a psychiatrist’s job… is to create what they call transference or, really, professional intimacy,” co-star Oliver Platt notes. “But then where do you draw the line? I can’t imagine how complicated that would be, especially for someone who’s sort of thrown in the deep end and [is as] soulful as Sarah Reese. It’s [Dr. Charles’] job not just to teach her, but protect her, too.”

So for the first time, he issues “a direct order” to his student. And she better listen up, because the psychiatrist’s opposition to her attachment comes from personal experience, executive producers Andrew Schneider and Diane Frolov reveal below. The EPs also preview what Danny’s presence means for Dr. Reese’s relationship — and which Chicago P.D. detective gets involved.

TVLINE | What’s in store with Danny’s return?
ANDREW SCHNEIDER | When you have a person who’s been victimized in sex trafficking, it’s very hard to extricate them from this life. There are so many psychological and even physical pressures on these people. It’s a complex situation.
DIANE FROLOV | Very often, that’s all they’ve known for a long time, and their sense of self-worth is so diminished that it’s hard for them to re-enter into normal life.

TVLINE | What is Dr. Reese’s stake in all of this?
SCHNEIDER | She’s emotionally involved. It’s a young man close to her in age. She sympathizes with him. She sees the desperate situation that he’s in, and it brings out her soul. It’s really an emotional connection, as well as a medical connection.
FROLOV | I think it’s also a feeling of being helpless in this situation.

TVLINE | Does it cause any problems for Dr. Reese and her boyfriend? As you said, he’s a young guy, and not an unattractive one.
SCHNEIDER | No, it doesn’t cause those kind of problems. It causes issues with Dr. Charles, who has issues with the way that she’s treating this patient. So that’s where the conflict is generated.
FROLOV | [We’ll find out] why it affects Dr. Charles, this case. 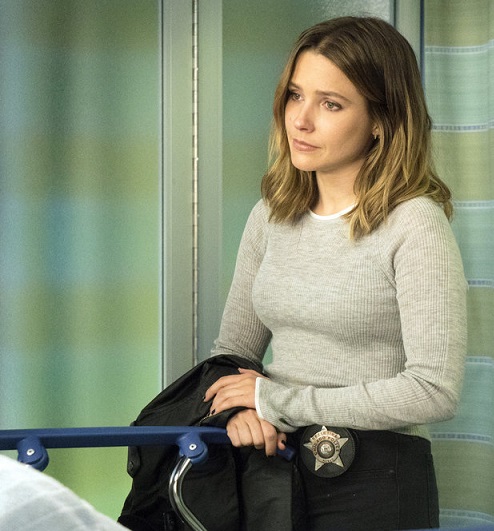 TVLINE | Does the case involve SVU‘s Benson?
ANDREW SCHNEIDER | No. But [Chicago P.D.‘s] Detective Lindsay comes in, and she actually does two episodes crossing over, dealing with this boy and his situation.
DIANE FROLOV | Because she has personal experience with this.