In the wake of Rory’s death, Wednesday’s American Horror Story: Roanoke upped the fear factor, turning loose Agnes on a rampage, revealing Dominic’s dark side and sending Lee, Audrey and Monet down a perilous path in hopes of making us squeal like the Piggy Man. Did it work? Let’s review the events of “Chapter 7,” then hash it out in the comments. 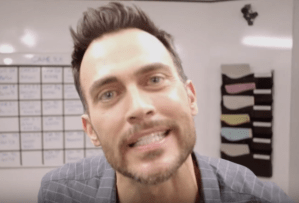 PUTTING THE ‘R’ IN ‘R.I.P.’ | As the hour began, Sidney was delighting in Matt’s attack on Dominic and, ever the charmer, shrugging off concerns about Diana’s whereabouts. When the producer wasn’t looking at the monitors, his cameraman noticed that hello (!), somebody had stabbed Rory. Upon hearing his P.A. scream, he called for the cameraman to film her dying. They didn’t get much footage, though, before Agnes had butchered them all.

In the Millers’ former house, Audrey was trying out different inflections of “Rory” in hopes of finding her husband. When that didn’t work, they searched from room to room, with Lee shooting every second on her cell phone. Eventually, Dominic found a giant puddle of blood. Rather than freak, Audrey decided that Sid had put Rory up to the stunt so that he could jet back to L.A. to do his Brad Pitt movie (and, in the process, leave his older bride behind).

‘WHAT’S MORE IMPORTANT THAN SCREEN TIME, HUH?’ | Off her triple murder, “fan favorite” Agnes seemed to alternate between regretting killing the P.A., who she knew was a mom, and slipping into Tomasyn-speak. Mid-rant, she was scared silly when she found herself surrounded by the stick figures that seemed to show up wherever The Butcher was. Meanwhile, Dominic suggested to Shelby that Matt never touched her the way that he did. She wasn’t shivering, however, she was “vibrating with rage,” she said. For his part, Matt didn’t give a s— what they did.

In a subsequent confessional, Dominic admitted that Sid had wired him with a body cam and given him instructions to basically wreck his co-stars. And, since it meant ratings and screen time, the actor had approximately zero regrets about it. (Birds of a feather… ) Upstairs, Shelby began filming Agnes with her cell just as the madwoman was about to kill her. Only, before Agnes could finish the job, Dominic intervened. (Guess he isn’t all bad, then.) 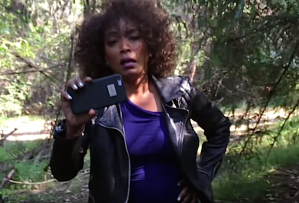 HELP WANTED | With the phones cut and Shelby injured, Dominic was reduced to yelling at Sidney’s cameras to come and give them a hand, for God’s sake. Eventually, Audrey led Lee and Monet through the secret exit she’d learned about while shooting My Roanoke Nightmare. In the tunnels, they encountered… was it Rory as Edward? Edward’s ghost? Whatever it was, Lee shot it. Running into the woods, she, Audrey and Monet set off under the blood moon in search of the production truck. Once they located it — and Agnes’ victims — they discovered that it had no phones and the car was dead. In no time, Agnes — as Agnes tends to — attacked, and Lee — as Lee tends to — gunned her down.

Heading for town next, the women were forced to hide from The Butcher’s mob. Audrey was doing the practical thing and filming herself saying goodbye to Rory a la The Blair Witch Project when blood dribbled down on her from a body in the tree she was under — who else could it be but Rory? Just then, the trio ran afoul of the real Polks. At the same time, Agnes, back in her hideout, removed the bullet from her chest and resumed ranting. (Seriously — how hoarse must Kathy Bates have been after shooting all this?)

HEAD CASES | Left alone with Shelby, Matt told her that her indiscretion hadn’t ended their marriage, their moving into that house had. Later, he was spotted by Dominic trance-walking to Scathach in the basement of the house. When Dominic took Shelby to see what he had, she leapt to Matt’s defense, only to have him protest that he loved the witch. “She’s the reason I came back!” That being the case, Shelby went all Negan on his head, murdering her husband!

Apprehended by the Polks, Lee had to help prepare her own leg to be turned into “sweet meats” — which the psychos then turned around and served to Monet and Audrey! Back at the haunted house, Agnes was joined on the front lawn by The Butcher’s mob — and, to her horror, the actual Butcher, who was quick to introduce her portrayer to her cleaver!

So, what did you think of “Chapter 7”? Or, as Sid would put it, “Who in America isn’t coming back after they see that?!?” Hit the comments.