The Vampire Diaries is getting its goodbyes in early, 10 hours before kicking off its final season on Friday (The CW, 8/7c).

TVLine has your exclusive first look at the show’s Season 8 poster, in which all of your Mystic Falls faves — Enzo, Bonnie, Damon, Alaric, Caroline, Stefan and Matt — assemble for a somber, yet familiar, occasion: a funeral.

You know the drill: Slap on your Speculation Goggles™ and scroll down to check out the poster in full… 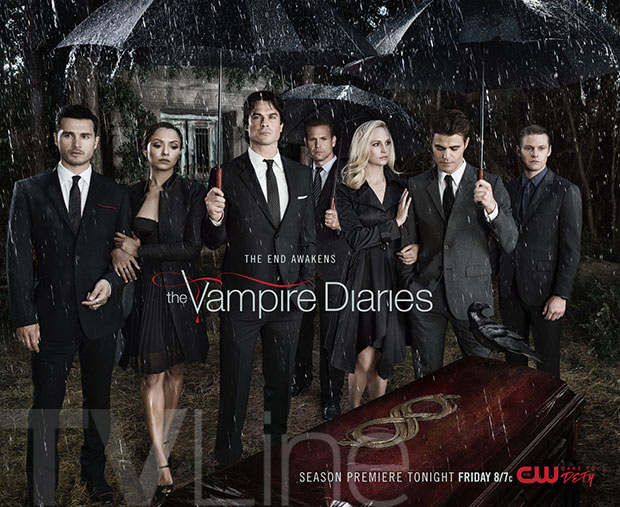 So, what sorts of nonsensical theories can we form based solely on this one piece of art? Let’s find out:

* First thing’s first: That’s supposed to be Elena in the casket… right?

* Enzo and Damon are both looking in the same direction, away from the group, which makes sense given their current connection to… whatever that thing is in the Armory vault.

* Stefan appears to be in need of some major consoling — his brother is M.I.A., after all — which Caroline is more than happy to provide. (Despite Paul Wesley’s warning of a “dark” turn for the couple, something tells me they’re going to be A-OK.)

* Bonnie, having lost her magic and her man, is looking rightfully pissed.

* Alaric is positioned away from the group, but still close to Caroline, a possible nod to the awkward co-parenting they’re going to attempt.

* And then there’s Matt, who appears to be interacting with no one. (Don’t worry, executive producer Julie Plec has promised lots of good, emotional material for Zach Roerig’s character this season — even if we don’t see him right away.)

OK, I’ve officially run out of speculation gas. What theories can you glean based on the final season’s poster? And how do you hope this all ends? Drop a comment with your personal wish list below.