This was a great reason to skip Friday night dinner: The Gilmore Girls Fan Fest kicked off Friday in Washington Depot, Conn., (the real-life inspiration for Stars Hollow) with a gathering of devoted fans, all buzzing with anticipation for next month’s Netflix revival. And Friday night’s “Behind the Scenes” panel discussion — moderated by our very own Michael Ausiello — gave us some juicy tidbits about the original seven-season run of the series.

Here are eight behind-the-scenes stories they shared during Friday’s panel:

1. Washington Depot was indeed the town that inspired creator Amy Sherman-Palladino to create the tranquil town of Stars Hollow. After Amy sold a one-sentence pitch to The WB (“a mother and daughter who are best friends”), she and her husband Daniel Palladino drove through Washington Depot and stayed at the town’s Mayflower inn. As Zimmerman remembered, “they just fell in love with the town and the characters in it… and the rest is history.”

2. Gilmore Girls is famous for its highly caffeinated wordplay, which made dialogue coach Bell an essential part of the production. The regular actors grew accustomed to the scripts’ unique rhythms, but Bell had to help out the guest actors, telling them: “That was good, but now you need to Gilmore-ize it. Speed it up.” What’s the most takes it took for an actor to get it right? Lawrence recalled one scene that took a whopping 36 takes. (Put on another pot of coffee, Luke.)

3. As writers on the show, Lawrence and Zimmerman remembered going on summer retreats with Amy and Dan to work out all the storylines for the season. Lawrence recalled a group trip to Vegas: “It was very Sinatra-esque. We met in cabanas; we had cocktails. We did water aerobics together!” She added a key element of the Gilmore Girls writers’ room: “giant whiteboards, teeny-tiny writing.”

4. Remember Jackson’s wrestling pajamas from Season 2? Campbell sure does, just because of how much effort it took to make those. The costume department received the script the night before, so Campbell had actor Jackson Douglas send her photos of himself in high school. Campbell frantically Photoshopped Jackson’s face onto the bodies of high school wrestlers and then rushed to get the PJs to set in time for shooting: “We got them on Jackson just in time.” 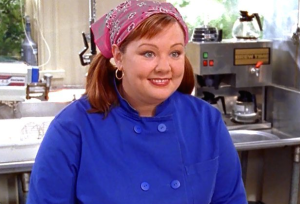 5. Melissa McCarthy is a huge star now, but she was just another struggling actor when she auditioned for Sookie. Casey and Rudofsky said they had to find another Sookie, because first choice Alex Borstein couldn’t get out of her Mad TV contract. They auditioned “a few hundred” actors before Casey remembers looking at McCarthy’s headshot: “a bright beautiful smile, but the picture wasn’t quite in focus.” Still, they liked her look, and the fact that she had trained with the Groundlings improv troupe. And when McCarthy came into audition, she left no doubt; as Casey recalled, “it was done.” McCarthy went on to read for network executives, and Casey joked to her on the way in, “Don’t f—k it up.” And she didn’t!

6. Another big role to cast was Rory’s teen boyfriend Dean. Casey recalled when she joined the show, they had already fired two Deans. A 17-year-old Jared Padalecki came in to read for the role, and as Rudofsky remembered, “he was just so cute” — and he could act, too. They took him to meet Amy, and she later said to the casting directors, “Well, that’s not fair. You can’t just find him on the first try.” But Campbell remembered a serious costuming issue when Padalecki had a huge growth spurt between Seasons 1 and 2. She had to make sure his outfit matched, and she yelled at him: “Jared! You grew, like, a foot!”

7. Campbell also confirmed that there was a strict “no skin” policy on the Gilmore Girls set. Amy Sherman-Palladino did not want to see any bare midriffs on the actresses, Campbell said: “If you were in Connecticut in winter, you’d be freezing.” So she would actually have to watch the monitor on every take to make sure no skin was exposed. The episode director would even have to cut if the camera caught any midriff.

8. Gilmore Girls had an amazing cast of actors, of course, but Rudofsky does remember “the one that got away.” While casting a “gritty teen drama,” she remembers a young blonde actor who delivered “one of the most amazing auditions I’ve ever seen.” So when Gilmore Girls was looking for a football-player character, she talked this actor up to Amy and all of the producers. But then he auditioned, and “it kind of fell flat,” so he didn’t get the part. That actor’s name? Ryan Gosling.

Check out TVLine’s treasure trove of Gilmore Girls posts, then hit the comments and let us know what you want to see the most from the revival.