CBS is going to the distance with three of its rookie series, ordering full seasons of Bull, Kevin Can Wait and MacGyver. The “back nine” pickups mean all three series’ will produce 22 episodes in their inaugural runs.

Bull — starring Michael Weatherly as a pre-Oprah’d Dr. Phil — has thus far proven to be a worthy Tuesday companion to Weatherly’s alma mater NCIS. In its first three outings, the show — which is fall’s most-watched new series — is averaging 14.6 million live viewers and a 2.1 demo rating, improving 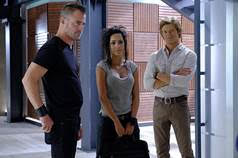 “We’re thrilled viewers have embraced these three shows creatively,” said CBS’ entertainment president Glenn Geller in a statement. “Each one has made an immediate and positive impact on our schedule, while significantly contributing to growing their respective nights.”