Two key pieces of the Bartlet administration are teaming up again.

Bradley Whitford is set to guest star on CBS’ Mom, reuniting him with The West Wing co-star Allison Janney. According to Entertainment Weekly, Whitford will play an old friend of Adam (William Fichtner), the current boyfriend of Janney’s character Bonnie. The old friend is a Hollywood director with a fondness for the sauce — which might not sit well with recovering alcoholics Bonnie and Christy (Anna Faris). 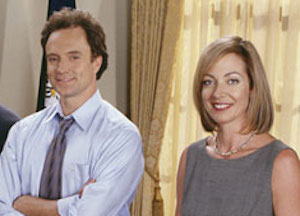 Mom returns for a fourth season on CBS on Oct. 27 at 9/8c; Whitford’s episode will air in January.

Will you tune in to see Josh and C.J. bantering once again? (And will they do a walk-and-talk?) Hit the comments and share your reactions.