Marvel’s Iron Fist made its debut at New York Comic Con on Saturday, where the cast and crew were on hand to screen the first trailer for the highly anticipated superhero drama, premiering March 17 on Netflix. 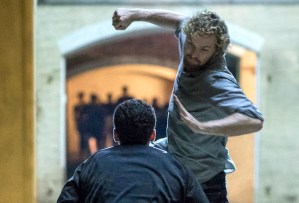 In the trailer, Daniel Rand is teased as a “living weapon,” “our greatest warrior” and the “final Defender,” alluding to the fact that Iron Fist, Netflix’s fourth collaboration with Marvel Television, is its last before the highly anticipated The Defenders, which will bring together Daredevil, Jessica Jones, Luke Cage and the aforementioned Iron Fist.

The hour-long panel, which was held on the main stage at the Javits Center, also gave audiences a peek at five (!) scenes from the upcoming series, which Loeb revealed had just completed production at 9 am this morning. A few highlights:

* Showrunner Scott Buck said he was “rather reluctant” to work on a comic-book series, but after watching Daredevil, he was convinced that he could still create a show about “a real character in a real world.”

* Dawson, who has played Claire Temple in each of Netflix’s Marvel series, teased that this would be the first show in which she gets to really “kick some ass.”

* Henwick described Colleen Wing as a “dope character” who views fighting and martial arts not so much as a hobby, but as a way of life. In one of the clips screened for fans, Colleen enters a cage match against two men and breaks one of their arms using only her thighs.

* Finn Jones was front and center as Daniel Rand in four of the five clips, where he not only took out a series of security guards at Rand Industries, but confronted a group of ax-wielding kidnappers amid an abduction. The fifth and final scene featured his first interaction with Harold Meachum.

* When asked how he prepared to play the menacing Harold Meachum, Wenham said he “took some real-life examples of captains of industry who are rather complex individuals and infused them into the performance.”

Marvel obsessives, thoughts on the first trailer for Iron Fist? Drop ’em all in a comment below.