Rapunzel, Flynn and the rest of the Tangled crew are making tracks for Disney Channel, where they’ll help fill in a few blank pages of their story.

The network on Friday released the first teaser trailer for Tangled: The Series, which takes place between the events of the original 2010 film and the 2012 short Tangled Ever After. The series will follow Rapunzel as she “acquaints herself with her parents, her kingdom and the people of Corona.” 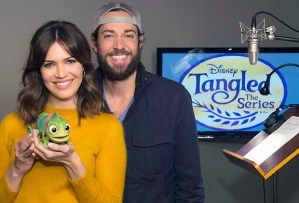 Set to premiere in 2017, the series features the voices of Mandy Moore (This Is Us) and Zachary Levi (Chuck), reprising the roles of Rapunzel and Eug… uh… Flynn Rider, respectively. And as the teaser seems to suggest, it’ll answer the question on everybody’s mind: How’d Rapunzel get her hair back?

Hit PLAY on the above video — which will make its TV debut during Friday’s premiere of The Swap — then drop a comment with your thoughts on Tangled: The Series below.