The New Girl and Brooklyn Nine-Nine worlds are about to collide… over a cup of soup?

Next Tuesday’s two-part Fox comedy crossover event, an exclusive sneak peek of which can be found above, finds Jess & Co. venturing to New York to watch Schmidt get honored by his high school. As exec producer and co-showrunner Brett Baer previews, some unplanned “fun ensues” when Jess is tasked with “retrieving soup from Schmidt’s favorite deli, which happens to be right where the [99th Precinct] is. So Jess is on her way to get this soup and she has a run-in with various members of the Brooklyn gang.” 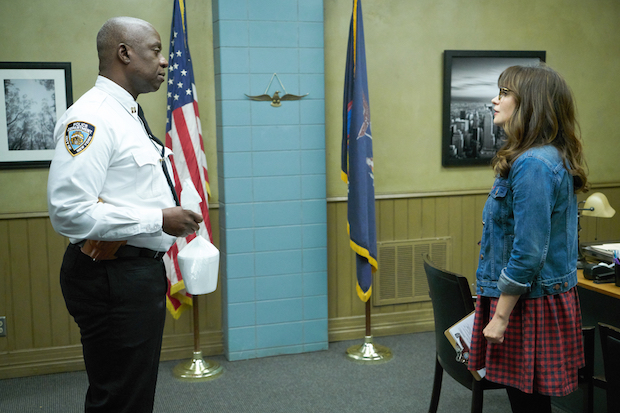 It’s not clear what exactly lands Jess in the Nine-Nine, but Baer reveals that the L.A. native has a rocky history with the city that never sleeps. “Jess has always had a rough go of it in New York,” the EP explains. “She’s been there once before and the city kind of beat up on her a little bit. But she is vowing to, no matter what happens, make sure that Schmidt has an amazing trip.”

The two-part crossover, which also marks the return of Nora Dunn as Schmidt’s mom, airs Tuesday, Oct. 11 on Fox.