In advance of The Simpsons‘ 28th season premiere (Sunday, 8/7c), Fox has released the episode’s highly anticipated couch gag, which puts the “Ooo” in “Woo-hoo[o]!”

An homage to Adventure Time, the 45-second gag turns the residents of Springfield into characters from the hit Cartoon Network series. (Mr. Burns as the Ice King is almost too perfect.) 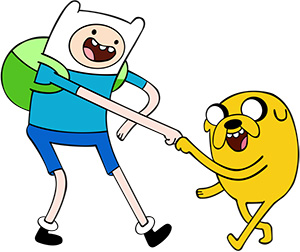 For those unfamiliar with Adventure Time, the series — which recently wrapped its sixth season on Cartoon Network — follows Jake the dog and Finn the human (pictured right) as they fight to protect the magical land of Ooo. Hopefully my earlier joke makes a little more sense now.

Hit PLAY on the couch gag above, then drop a comment below: Is the Simpsons/Adventure Time crossover everything you hoped it would be?