The Middle is serving up a Heck of a family dinner in its Oct. 11 season premiere (ABC, 8/7c) — and we’re already cringing with anticipation.

As TVLine previously reported, Awkward’s Greer Grammer will recur in the comedy’s upcoming eighth season as the supposed love of Axl’s life, and now we have your exclusive first look at the entire Heck family meeting the potential new recruit. 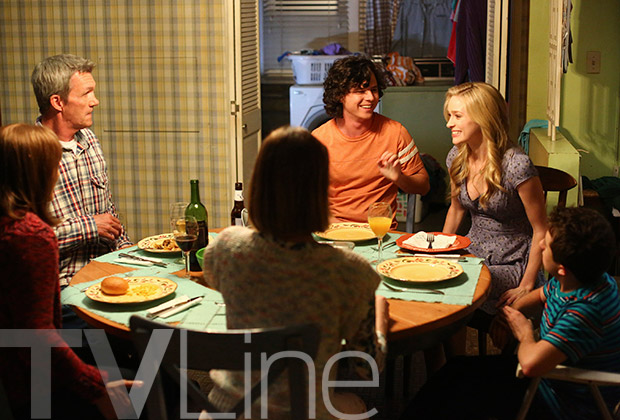 But keep this in mind: While the meet-and-greet may look like a friendly affair, the premiere’s official synopsis suggests that the evening is doomed before it even begins:

Frankie and Mike are excited to meet April, the love of Axl’s life, but discover that love may indeed be blind when April reveals a quirky personality trait.

–
As for the rest of the Heck clan, the season premiere finds Sue changing her major to theater — after an inspirational summer working at Dollywood, naturally — while Brick struggles to break free from his “weird kid” persona as he prepares to enter high school.