Kiefer Sutherland’s new ABC drama Designated Survivor boasts the highest of high concepts: What if a low-level government schlub was thrust into the Presidency following a deadly attack? It’s an instantly gripping premise (previously mined by Battlestar Galactica), but a tricky one to pull off, and Designated Survivor (premiering Wednesday, Sept. 21 at 10/9c) stumbles a bit in the execution.

We watched Sutherland crack skulls and foil terrorist plots as tough-guy agent Jack Bauer for nine seasons on Fox’s 24, so it’s almost comical to see him here as a soft-spoken bureaucrat. His character, Cabinet member Tom Kirkman, sports a pair of bookish Clark Kent glasses, and the pilot goes out of its way to cast Kirkman as an easy-to-push-around beta male. (One character sneers that he’s “the lowest rung on the ladder.”)

Kirkman’s life changes, though, when he’s made the “designated survivor” during the President’s State of the Union address, which means he’s placed in a secure location while everyone important is busy in the Capitol. There, he kicks back with a beer to watch the speech on TV. But suddenly, the signal cuts out and Secret Service agents rush in. The news comes quickly: A huge explosion has destroyed the Capitol, wiping out everyone inside — and making Kirkman the new President by default.

Who did this? And what happens now? Again, this is a juicy starting point for a TV show, with ultra-high stakes and a million plot threads to follow. But it’s also a gigantic amount of story to try to squeeze into a one-hour pilot, which leads to some clunky exposition dumps. Kirkman’s chief of staff (Chasing Life‘s Italia Ricci) shouts at him at one point, “You’re the Secretary of Housing and Urban Development!” Um… pretty sure he knows that?

And then there’s the obvious connection to the September 11th attacks, with plumes of smoke in the air and rescue dogs sifting through rubble. Maybe I’m just sensitive, but there’s something unseemly about taking a devastating attack like this and turning it into a fast-paced TV thriller. We see some brief flashes of shock and grief from the characters, but mostly they just snap into action, with no time to waste mourning what just happened. 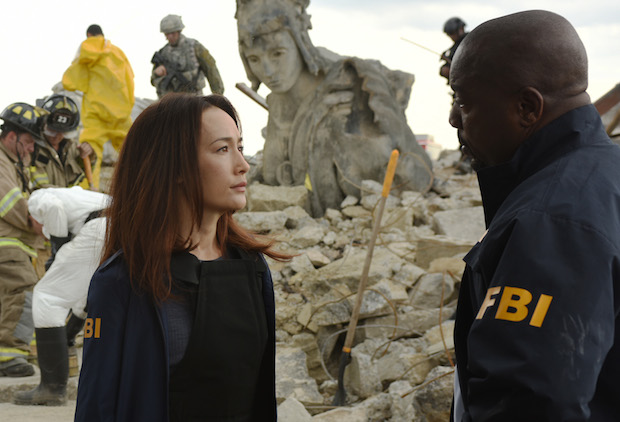 behind Sutherland is sketchily drawn. As new First Lady Alex Kirkman, Natascha McElhone (Californication) plays The Wife — nothing more, nothing less at first blush. Their kids are forgettably generic. Maggie Q (Nikita) is a welcome sight, but her FBI agent Hannah Wells is so far just a hook on which to hang the show’s procedural angle. House doc-turned-real-life White House staffer Kal Penn has the most potential as a skeptical speechwriter tasked with making Kirkman look presidential.

But then again, this is Kiefer Freaking Sutherland we’re talking about here. Putting him in glasses and calling him a loser is like putting the prom queen in glasses and calling her a geek. It doesn’t wash. Sutherland does a good job portraying Kirkman’s deep ambivalence about the situation he’s been handed. But when he has to play hardball with an Iranian ambassador, the tough talk comes too easily to him. It’s like Kirkman has been possessed by the ghost of Jack Bauer.

As compelling as Designated Survivor‘s concept is, it’s hard to see how it will sustain itself as a weekly series. It’s the kind of idea that looks great in a trailer, but could peter out around Episode 10. We’ve seen this too many times before: flashy pilot, underwhelming follow-through. With its heart-stirringly patriotic score, the show seems to be aiming for The West Wing. But it reminded me more of ABC’s Last Resort, from a few years back, with its tense battle of wills over a possible nuclear armageddon. How long did that one last again?

THE TVLINE BOTTOM LINE: Too flashy for its own good, Designated Survivor aims high and falls short.