Which Original Team Arrow member feels “replaced”? How angelic is Supernatural Season 12? Is Bones booked for a head trip? Are rough seas ahead for Once Upon a Time‘s #CaptainSwan? Read on for answers to those questions plus teases from other shows.

Any teases on where we will find Arrow‘s John Diggle, mentally and emotionally, at the start of the season? —PJ
“He’s stationed in Chechnya,” executive producer Wendy Mericle reveals. “He’s still in the military, and he’s very much a man without a state. He’s away from his family, and he’s away from the team, so he’s away from that family. He’s trying to figure out how he can get that sense of himself back after killing his brother.” Once Dig does come back to Star City, he won’t be a fan of Oliver’s ragtag new superfriends. “He’s not going to love all these little upstarts, trying to take over his role,” Mericle says. “But he’ll adjust. He’s going to find some common ground with Wild Dog, and that will help take the sting out of it.”

Will we see Castiel more this season on Supernatural? —Amy
It sure sounds like it. Showrunner Andrew Dabb told Vlada Gelman the goal for Season 12 was “to tell some stories that were a little bit more personal with Castiel, both in terms of his relationship with Sam and Dean and digging into his past a bit.” The angel will also hit it off with another Winchester. “He and Mary have a connection. It’s not a romantic one, but they have a lot in common. They’re both strangers in a strange land, in a way.” And following some very grand celestial plots, “We wanted to focus [Cas] down a bit more,” Dabb explains. “He feels responsible for Lucifer getting out of the cage, although as we’ll learn, pretty much everyone else on our show feels responsible for that, too. Obviously, as threats to Sam and Dean come up, he will be there to stand by our boys’ side.”

Any juicy Bones spoilers to dish out? —Matt
Brennan might continue with therapy next season even though her last session ended with her shrink getting arrested. According to co-showrunner Jonathan Collier, “Nothing is off the table, because some very, very, very serious, meaningful, hard-hitting things are going to happen to Brennan.” 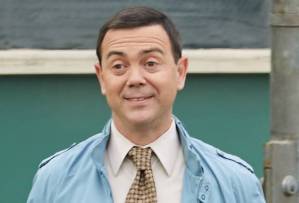 Brooklyn Nine-Nine? —Justine
Melissa Fumero told me that although the squad’s latest captain (played by Party Down‘s Ken Marino) doesn’t die on his first day a la Bill Hader’s Dozerman, “He’s maybe not the sharpest tool in the shed.” Joe Lo Truglio meanwhile dropped this baby bombshell in my lap, after triple-checking to make sure it was OK to reveal: “Boyle has a child.” :-O

Any info on Bruce and Selina’s developing relationship on Gotham? — Catherine
Camren Bicondova says that Cat’s bond with the future Bat “is going to evolve into a more teenage relationship, instead of a middle school thing.” And hopefully as Bruce dabbles with the “playboy” persona that will one day become his false face, he can be there for Selina as she is dealt a blast from her past. “Selina gets to meet a family member that’s very dear to her heart — her mom,” says Bicondova. “And that doesn’t really go the way she expected it to.”

Do you happen to know when the Whose Line Is It Anyway? episode with Candice Patton will air? —Amma
Originally to air this week, the Flash fave’s improv outing has yet to be rescheduled.

What’s next for Once Upon a Time‘s Hook and Emma? —Allison
In the Season 6 premiere, “We pick up pretty directly from where we left them at the end of last season, where for the first time Emma professed her love without the duress of a life-or-death situation,” co-creator Adam Horowitz reminds. “Of course, life-or-death situations come pretty quickly on our show, so that will change.” As EP Eddy Kitsis in turn notes, “No relationship is a fairytale. So if people are expecting no drama, we hope that they will enjoy what we are showing.”

What is going to happen to Blindspot‘s Jane? Will she be part of the team again? —Jennifer
Given all that happened in the May finale and what she reveals in this Wednesday’s Season 2 opener — coupled with the fact that a former teammate shoots her in the back! — rejoining Weller & Co. should be a very neat trick.

Can I get anything 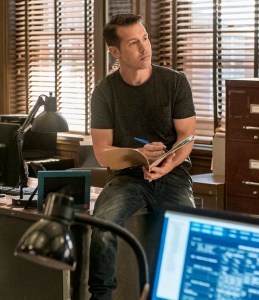 about Chicago Fire‘s Sylvie Brett? —Carlynn
Will Chicago P.D.‘s Antonio be getting a storyline? —Angelica
Two questions, meet one stone. The paramedic and the detective will hit it off when they cross paths during an incident in Fire‘s Season 5 premiere. “He’s there for an informant of his who was injured,” executive producer Matt Olmstead previews. And while Antonio and Sylvie might seem like an unlikely pairing at first glance, the EP points out, “The things that initially would make you think that they should not date are things that we actually leaned into, that made sense, even though he’s older, divorced [and has] two kids. She’s looking for a real man, and he’s looking for a good woman.”

Will Chicago Med‘s April Sexton ever get a storyline? — Tobasha
Not only is the nurse getting a storyline, she’s getting a “long arc” about her recent health crisis, exec producer Diane Frolov says. In next Thursday’s Season 2 premiere, “she’s really avoiding Tate and his son because of her fear about giving TB to them even though she is latent. She has to be really convinced that she’s not contagious and can continue with her life. But as she does so, her TB ceases to be latent and becomes active.”

Loved the “Legion of Doom” pic! Any new Legends of Tomorrow scoop? —JJ
Among the JSA members that have been cast for Season 2, it turns out there are two Obsidians. When the team first meets the hero, he is played by Dan Payne (Strange Empire). The previously announced Lance Henriksen then plays a future version of the character.

I’m a big fan of BBC’s Doc Martin. Wikipedia says an American version is in development. Do you know anything? —@soundsbysteve
I asked around for you and learned that while everyone involved “really loved the project,” the U.S. adaptation ultimately didn’t come together.