This op-ed first started taking shape, in my noggin at least, when Tonight Show host Jimmy Fallon all but equated Donald Glover with a petite 16-year-old girl by having the Atlanta auteur participate in a life-size game of “Hungry, Hungry Hippos” alongside the U.S. Olympic gymnastics team (whose physicality made sense in the context of the arduous exercise).

But I held back.

Then, someone on James Corden’s team deemed it irresistibly hysterical for the Late Late Show host to sing the first line of a song over and over (and over) again, with recording artist Josh Groban.

Again, I held back. Because surely the late-night TV hosts were just doing best they could during these final dog days of summer.

But then, with the Fall TV season upon us, Academy Award winner Renee Zelleweger donned a “fat robot” suit to battle “fat Santa” Jimmy Fallon in a ring. I must imagine that few entries in Bridget Jones’ diary are as mortifying.

So here we now are, and here I am asking: What the hell are we doing, guys?

Donald Glover and The Final Five are ‘Hungry, Hungry Humans’ on The Tonight Show

Let me acknowledge up front, yes, David Letterman engaged in stunts. Velcro suits. Dropping watermelons from roofs. Though almost always by himself, and never (best I can recall) at the cost of a guest’s dignity.

“I think that if Letterman in a bath of Rice Krispies happened today, that would be a huge viral hit,” Late Late Show EP Ben Winston said to THR.com, when asked about the pressure to churn out buzzy videos a la Carpool Karaoke. “I don’t think it’s late-night [TV] changing, I just think it’s the way we watch television is changing — and maybe the better shows are benefiting from that.”

When the comedy bits are “better,” sure.

We do live in a different pop culture-verse now versus Letterman’s or the great Johnny Carson’s heyday, one where viral videos stir the drink. Where late-night shows drum up most of their potential tune-in from clips that circulate the next day, inviting you to see what utter wackiness they dreamed up for so-and-so’s latest visit. (How quaint Ed Ames’ famous Tonight Show tomahawk demonstration looks now!) And that is OK. We all know the value in having to “keep the lights on.” 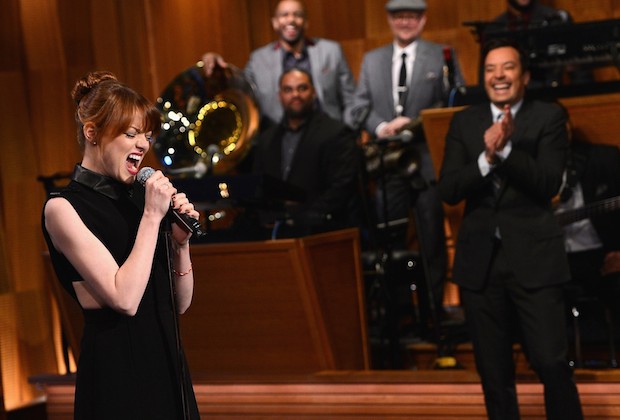 Yet for every brilliant idea such as Fallon’s “Lip Sync Battle” (which spawned its own Spike series) or “Classroom Instruments” (which is very much about the singer’s skill), 0r Corden’s “Carpool Karaoke” (coming as a series to an Apple device near you!), most of broadcast’s late-night hosts have beseeched guests (or, their publicists) to bend over backwards in the name of birthing — fingers crossed! — The Next Great Bit.

These comedy concepts tend to fall into two camps: those that afford a guest an opportunity to flex a new muscle and or let slip a secret side of themselves (see: Corden’s “Fill Your Guts or Spill Your Guts” or the series-bound “Drop the Mic“), and those that exist simply to tell the audience, in the vernacular of that one tabloid, “Stars — They’re Just Like Us!” Meaning, they will don an inflatable fat suit for no other reason than to do so. While viewers learn absolutely nothing new about the talent in the process.

In that latter scenario, social media is again to blame. Celebrities now tweet and SnapChat and Instagram as a means to take you inside (a curated version of) their private world, thus raising the stakes for those who (are supposed to) interview them for a living. “Everyone already knows about Biff Longstocking’s adorable rescue dogs and his recent trip to Iceland,” a host may reckon, “so I will abort any attempt at a proper Q&A and instead see how ridiculous a circumstance I can thrust him into!”

Sadly, this disappointing trend may be toothpaste that can never be put back in the proverbial tube, as even Corden, who thankfully shows a modicum of restraint when compared to some of his peers, suggested in a Vanity Fair profile.

“[T]he trick is to just make a great show, because something isn’t going to fail on the show and then be virally amazing,” he noted. “Ultimately what you have to worry about with these shows is not ratings as much as relevance, and we have to be at the forefront at that.”

What do you think about the past, say, five years of late-night TV gimmicks? Is there too much focus on “How silly can we get?” and too little value placed anymore on the interview?