Make room, Scream Queens fans, because a new Season 2 promo has arrived — and there’s a lot to unpack.

In addition to giving us more insight into the way  Munsch runs her hospital of horrors, this new promo — obtained exclusively by TVLine — also gives us our first look at several of her patients.

The catch? There’s no way of knowing whether some of these unfortunate individuals (pictured below) are played by any of the named guest stars we’ve been reporting on for the past few months. Honestly, you could tell me the one at the top right is Colton Haynes, and I’d believe you: 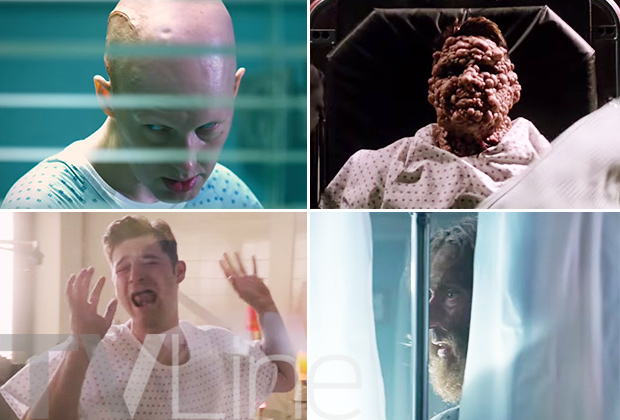 In fact, the only clearly identifiable new cast member in this promo is Jerry O’Connell, seen dumping a (dead?) body into what appears to be a radioactive swamp. We were already pretty suspicious of his character after seeing that first photo, but now we’re straight-up terrified:

(On second thought, is that Laura Bell Bundy giving O’Connell an assist with that corpse?)

Hit PLAY on the new promo above, then drop a comment with your thoughts on Scream Queens‘ new season below.