Light ’em if you got ’em, because the first photos from Season 4 of Marvel’s Agents of S.H.I.E.L.D. allow a first look at Robbie Reyes aka the vengeful Ghost Rider.

Will May and Mac witness the mild-mannered mechanic (played by Gabriel Luna, below) get hot and bothered in his very unique way?

“I don’t know much about Ghost Rider [in the comics], and I want it discover it along with the audience what he’s about,” Ming-Na Wen tells TVLine. “But our writers are creating wonderful backstory for him, so he’s not just a creature that pops out of nowhere for the fun of it.”

S.H.I.E.L.D.‘s showrunners thus far have been Marvel-ously mum on Reyes’ precise origin story, but echo Ming-Na’s words. “We’re hoping that the character has not just a flaming skull but some real heart to him, and some depth,” says Jed Whedon. And just how often will he blow his lid? Says Whedon with a laugh, “His skull is on fire exactly as much as we can afford!” 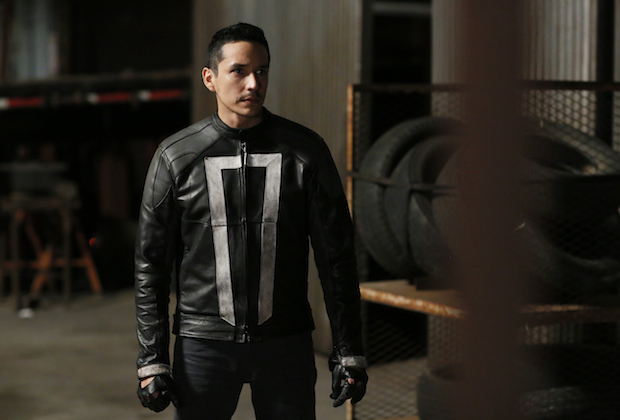