On CBS’ Zoo (Tuesdays at 9/8c), James Wolk‘s Jackson Oz is one wild and crazy guy — especially now that he is halfway through his mutant transformation.

Having had his testy triple-helix DNA triggered by Abe’s betrayal, an enraged Jackson fled the team and was poised to turn himself over to General Davies when his presumed-dead dad showed up to save his life. Can father and son make nice? Or is Jackson about to be duped again?

Here, Wolk offers TVLine an update on Jackson’s mutant state, previews the team’s trip to the land of dinosaurs (?!) and teases a “fantastic” Season 3 plan.

TVLINE | How “human” is Jackson right now? Because we saw his pupil go all “defiant” during his argument with Abe, but then last week he seemed a calm, cool negotiator when on the phone with General Davies.
Jackson’s a little bit out of sorts, I’ve got to be honest with you. He’s halfway-mutated, so he’s not thinking clearly. In the clip you have [posted below], you see that he’s acting aggressively. Things are getting pretty hairy for him!

TVLINE | When he first got bit in the premiere, did you have any concern — or anticipation — about eventually going “full mutant”? After all, a bubbly-skinned James Wolk is nothing we’ve seen before.
[Laughs] I will say that when I found out that Jackson was becoming a mutant, yes, there was a fear of “I don’t want that, it’s not fun to be full mutant.” Plus, its a lot of body prosthetics.

TVLINE | I was going to say, many hours in the makeup chair.
Yeah, and it already takes a lot to make me look OK in the morning. 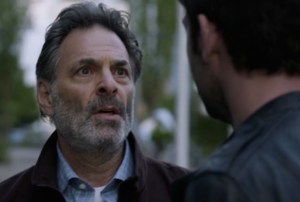 Robert (played by Ken Olin) pull you aside there at the end of the last episode. What does Dad have to say for himself? And is Jackson at all sympathetic?
Jackson is very sympathetic to his dad. They’re going through a lot together, and he just saved his life, so it’s a scary time for him. Plus, we dont know if Robert Oz is good or bad at this point.

TVLINE | We know he’s been working with Davies on the Noah Objective gas, but then again he also escaped protection. Maybe he’s having second thoughts?
At this point the audience doesn’t know if he’s duplicitous towards General Davies, or is he really playing Jackson? It will be interesting for the audience to see where Robert’s allegiances lie. But Davies needs Robert Oz, that’s for sure.

Watch an exclusive sneak peek from this Tuesday’s Zoo:

TVLINE | Along those lines, Season 2 has been so much fun and wackadoodle — but in the best way. Is that something the cast picked up on when you started seeing the first scripts?
Well, thank you for saying that. When you first see these scripts, you can’t help but go, “Wait a minute, what’s going on?!” But as you start buying into this world, and as we started seeing how fun it was for these stories to come alive, you just embrace it. You then hope that the audience is wanting and willing to go on that journey with you. And for those that have, this season has been very exciting.

TVLINE | On the flip side, as an actor 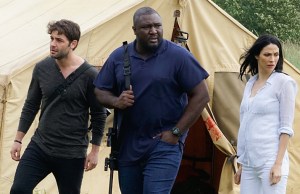 you must also appreciate the more real, brotherhood moments you’ve had with Nonso Anozie (Abe).
That’s the other thing, right? Even though the science is heightened, I do feel that this season we’ve had more interpersonal relationships, and that’s been great, because as an actor that’s what you want to play. So yeah, is it crazy that were looking for a saber-toothed tiger? Yes. But theres’ nothing crazy about two guys who are best friends, and one feels betrayed by the other. That’s real, that’s humanity. What’s cool is that were able to walk that fine line and have those real moments in a show that has a ton of fiction going on.

TVLINE | Will we be meeting any new creatures during these final episodes?
Just get ready for Pangaea, that’s all I can say. It’s going to blow your mind. I haven’t seen the way it comes off, but huge production values went into that, so it’s going to be an exciting experience. 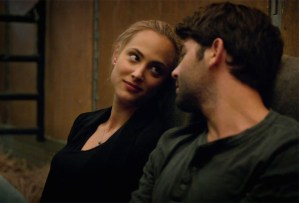 the heightened science, should we maybe not rule out the possibility that Chloe (Nora Arnezeder) is alive somewhere? People were really bummed out by her death. I was, myself, but I also just like a pretty lady.
I know — not only is she beautiful but she’s a great actress, and she’s definitely part of our family still. I would say that with Zoo, never rule anything out. [Laughs]

TVLINE | Plus, people can always buy the Zoo 2 book, as I did for a recent flight, because though largely unrelated to the series, Jackson and Chloe are happily together in that.
That’s a great call. If you want more Jackson and Chloe, buy the Book-Shot Zoo 2.

TVLINE | Lastly, does the finale end with lives in limbo, or is it about setting a clear stage for Season 3?
With a cliffhanger, lives are always in limbo. But what excited me most about this finale is what it illustrates for Season 3. I think it sets up a really fantastic and interesting world.

Want more scoop on Zoo, or for any other show? Email insideline@tvline.com and your question may be answered via Matt’s Inside Line.