Castle fans looking to experience exactly how Season 8 was supposed to end — in a way that teed up a Beckett-less Season 9 — won’t find that “extra” on the ABC series’ final DVD set.

TVLine has confirmed that among the deleted scenes on Castle: The Complete Eighth Season (available Aug. 23), not included is the cliffhanger ending that was to close Season 8 in the event of renewal. (Because ABC cancelled the drama five days prior to the finale, producers were able to tack on a coda that leaped forward seven years and confirmed “Happily Ever After” for Rick, Kate and their three kids.)

While some may surmise that the original ending simply didn’t feature the flash-forward (and thus faded to black with the marrieds on the loft floor, bleeding out from gunshots), there were other, subtle differences — though not enough to merit inclusion in the DVD set.

In addition to “some minor editing throughout [the episode] for time,” Season 8 co-showrunner Alexi Hawley tells TVLine, “The only editorial difference between the two [shootout] scenes was the cliffhanger version used some different shots at the very end to highlight the two of them on the floor together, rather than getting us into the tracking shot that took us to the time jump to the happy family.”

Had Castle been renewed, there would have been a time jump when Season 9 picked up, in part to accommodate the writing-out of Rick’s wife Kate, since Stana Katic had not been invited back for the fall. (As TVLine previously shared, one possible scenario had Beckett faking her death to join some sort of superspy organization.)

All told, Castle: The Complete Eighth Season features all 22 episodes from what would be the show’s final season, two audio commentaries (Nathan Fillion and guest star Adam Baldwin talk “Cool Boys,” while Jon Huertas, Seamus Dever and writer Barry O’Brien revisit “Heartbreaker”), bloopers, deleted scenes and a featurette in which the cast’s detective skills are tested by a puzzle room a la Season 8’s “The Blame Game.”

VIDEO: Castle’s Nathan Fillion on Not Getting
a ‘Proper’ Goodbye, The Season 9 Plan 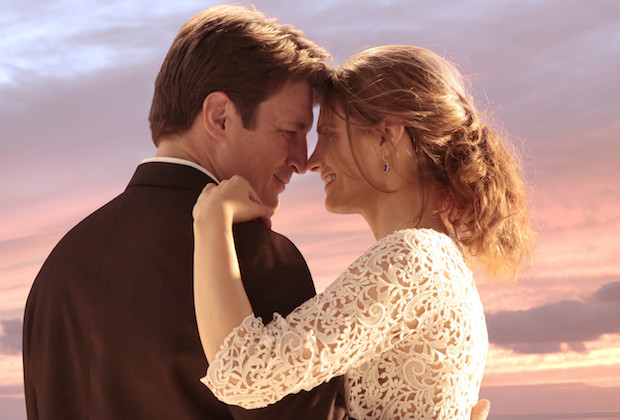