At Comic-Con on Saturday, Bryan Fuller — who is shepherding the anticipated reboot — announced that the show will be officially called Star Trek: Discovery, as in its titular vessel, the U.S.S. Discovery (NCC-1031), shown below: 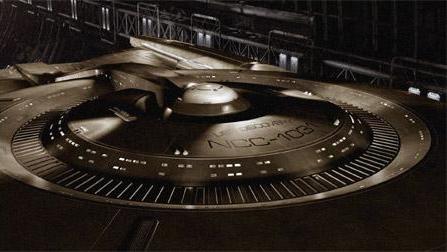 As previously reported, the premiere episode will be broadcast on CBS in January 2017 before transitioning exclusively to the CBS All Access streaming service.

Per the official CBS logline, “The brand-new Star Trek will introduce new characters seeking imaginative new worlds and new civilizations, while exploring the dramatic contemporary themes that have been a signature of the franchise since its inception in 1966.”

Fuller added at Comic-Con on Saturday, “We’re telling stories in a brand-new way. We’re not so much episodic. There have been 762 episodes of Star Trek television, so we’re going to be telling stories like a novel, chapter by chapter.”

As far as casting goes, he’s begun meeting with actors. “There’s a few people that we like,” Fuller has admitted, “and we want to carry on what Star Trek does best, which is being progressive.

“So it’s fascinating,” he continued, “to look at all of these roles through a colorblind prism and a gender-blind prism.”