Well into our endless summer of speculating about the identity of Negan’s victim in the Season 6 finale of The Walking Dead, the show has dropped what is likely to be the biggest clue we’re going to get: the Season 7 trailer.

The video not only 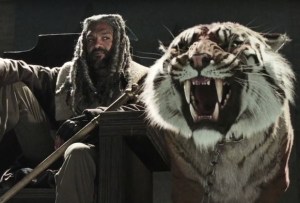 cruelly hints at how hard hit we’ll be by our imminent loss, it gives us our first look at King Ezekiel — played by Khary Payton, previously best known as a voice actor — and his pet tiger! In addition, the AMC juggernaut announced during its Comic-Con panel Friday that its season premiere will air Sunday, Oct. 23, at 9/8.

As in years past, the season will be split in two, with eight episodes airing in the fall and the remaining eight when the show returns from its winter break in February 2017.

Press PLAY on the trailer above to find out if it gives you any new ideas about the character who Negan said was “takin’ it like a champ” in the Season 6 finale, then hit the comments with your hopes/fears for Season 7.