Amazon is getting into the superhero business, having set an Aug. 19 premiere date for its pilot reboot of The Tick.

Two other comedy pilots premiering that day on the streaming service star Kevin Bacon and Jean-Claude Van Damme… as himself-ish?

The Tick | In a world 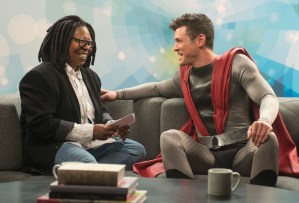 where superheroes have been real for decades, an underdog accountant (Vinyl‘s Griffin Newman) with zero powers comes to realize his city is owned by a global super villain long-thought dead. As he struggles to uncover this conspiracy, he falls in league with a strange blue superhero (Guardians of the Galaxy‘s Peter Serafinowicz). Counting Ben Edlund (Supernatural) among its exec producers, The Tick also stars Jackie Earle Haley (Watchmen), Valorie Curry (The Following), Yara Martinez (Jane the Virgin) and Brendan Hines (Scorpion). 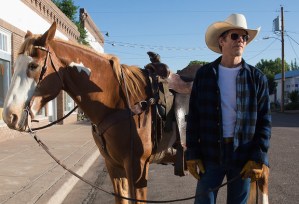 from what has been referred to as “the most important book about men and women written in the last century,” this series follows Chris (Kathryn Hahn, Transparent) and Sylvere (Griffin Dunne, Dallas Buyers Club) as they arrive in Marfa, Texas, and meet Dick (Kevin Bacon, The Following), an enigmatic writer who taunts their imaginations and upends their preconceptions about love and monogamy. Jill Soloway (Transparent), Andrea Sperling and Sarah Gubbins serve as EPs. 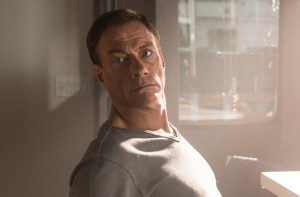 If you need to deftly eliminate a political rival, debilitate a multinational corporation or overthrow an entire government, there’s only one person to turn to: one of the most internationally recognizable movie stars in the history of film, Jean-Claude… Van Johnson (played by Jean-Claude Van Damme). Though retired for years, a chance encounter with a lost love will bring “Johnson” back to the covert contractor game — and this time, he’ll be deadlier than ever. Probably. Kat Foster (Your Family or Mine), Moises Arias (The Middle) and Phylicia Rashad (Creed) also star.

Which of Amazon’s upcoming comedy offerings most piques your interest?