Your precious slumber may be interrupted by every car horn, temperamental alley cat and arguing couple on the block, but before you lament your situation, put yourself in the shoes of The Night Of‘s Nasir “Naz” Khan. After a drug-fueled, Rip Van Winkle moment, the wide-eyed college student wakes up to find his sweet-but-slightly-off-kilter one-night stand has been savagely murdered in her bedroom.

While he’s maybe/probably not guilty — if Naz (Nightcrawler‘s Riz Ahmed) committed the crime, wouldn’t he have had more than just a little blood on his hands? — his actions after discovering the body don’t exactly paint him as an innocent man.

By the end of the premiere, it’s easy to see why the case’s veteran lead investigator Det. Box (Damages‘ Bill Camp) might think that getting a conviction will be easier than convincing Naz to offer up a DNA cheek swab before the words “I want a lawyer” have entered his brain.

But speaking of attorneys, there’s a glimmer of reasonable doubt at the end of the tunnel — as grizzled Jack Stone (John Turturro) stumbles onto the scene and agrees to mount the handsome Naz’s defense/offer him some crucial advice about not adding to the pile of evidence already stacked up against him.

Let’s recap the action from Episode 1 — and break down the nagging questions that’ll need answering over the course of the next seven weeks: 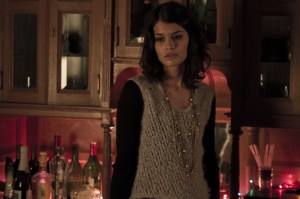 HE’D DO ANYTHING FOR LOVE, BUT HE WON’T DO THAT | Our story begins with Naz on campus, tutoring a star basketball player and scoring an unlikely invite from the guy’s teammate to attend a hot Manhattan party. We see the kid’s nervousness (“Nice to meet you — my name’s Naz,” he practices to himself) and excitement about briefly breaking away from a life of academia and familial duty with his close-knit Pakistani-American family in Queens. But when his ride cancels at the last minute, Naz impetuously “borrows” his dad’s cab — with his passage through a Manhattan toll plaza the first of many moments forebodingly captured on camera.

Since he can’t figure out how to activate the “off duty” sign, Naz winds up with a husky-voiced beauty in the back of his vehicle, asking to be taken to “the beach.” There’s a connection — or at least a heavy dose of pheromones — in the air, and the temperature between Naz and the woman heats up as they wind up uptown, on the banks of the Hudson, popping pills and basking in dreamy moonlight conversation. He’s skittish. She’s a little sad. But they return to her Upper West Side brownstone — how does a mysterious young woman like her afford a swell pad like this, without so much as a single roommate? — for some tequila, cocaine and light knife play. “That, I will not do,” says Naz, when the girl asks him to plunge a blade between her outstretched fingers. But he’s intoxicated — by her charm, by the pharmaceutical high — and before you can say “Yikes! She’s gonna need stitches!”, she’s ignoring her nasty hand wound, locking lips with this swarthy cabbie and bringing him up to the bedroom. 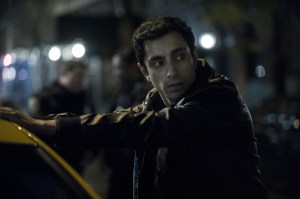 THIS JUST CAN’T BE THE MORNING AFTER | Naz wakes up with his head on the girl’s kitchen table, a little worse for the wear and anxious to return his dad’s vehicle before the sun rises. But when he gets upstairs, he realizes his new lover has been brutally stabbed to death. He flees in a panic, then has to return to the scene of the crime and break through the glass in the front door to sneak back in and retrieve his jacket and car keys (a minor crime noticed by a neighbor across the street) — as well as the knife with which he accidentally punctured the victim’s hand.

Naz winds up getting pulled over for erratic driving, but as brutal coincidence would have it, the cops who are questioning him get called to investigate the break-in at the house he just left. And so, from the back of their squad car, Naz endures watching the climb of flashlights to the third floor bedroom, then the arrival of an ambulance, a CSU/Hazmat unit, and Det. Box. He’s shipped back to the precinct, where he’s left to sweat this nightmare scenario for hours, but the silent unknown proves to be far from the worst thing he’ll endure.

As Box arrives and reads out details about the victim (named Andrea Cornish) and the suspected murder weapon, Naz is getting frisked by the beat cop who pulled him over. Right as Box describes the knife — “five inches long, an inch and a half wide, possibly serrated ” — the cop pulls the knife out of Naz’s inside pocket. And when he tries to flee, an eyewitness who saw Naz and Andrea on her stoop strolls in: “That’s him right there!” (OK, the moment’s a bit of a stretch, but it made my heart race, so I won’t question its overabundance of convenience.) 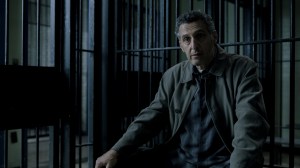 YOUR BODY IS A CRIME SCENE | The rest of the episode is a blurry nightmare, as Naz is stripped, swabbed and photographed — and interrogated by the wily, whip-smart, always calm Box. “She’s only the second girl I slept with,” says Naz. “I liked her. She was nice.” But he can’t recall any details — and maintains his innocence — which causes Box to tell him, that “Judges and juries don’t like ‘I can’t remember,'” that “honesty and remorse can shave a lot of years off” a sentence. It’s looking dire for Naz — with scratch marks on his back and surely Andrea’s DNA under his nails and on other body parts, too — that is until weary Stone arrives with his excema and his cynicism and spots the kid in a holding cell. He takes the case — thinking it was an assault, not an actual murder — but his advice to stay quiet, say “I don’t know/ask my lawyer” might just save Naz’s life in the end.

I’VE GOT QUESTIONS! | Clearly, we need to learn more about Andrea’s state of mind in the hours before the murder. While her “I can’t be alone tonight” could be interpreted as an invite to her bed, it seems like there’s some genuine fear in her voice, too, especially when she says she wishes she could teleport away from “something bad” and put herself somewhere else altogether. That subtext may be the key to proving Naz’s innocence, but there are other head-scratchers in the opening hour, too.

* Why did eyewitness Trevor — the racist weed dealer who referred to Naz as a “towelhead” — lie and say he was by himself when he saw Andrea and Naz outside her apartment? And did his companion’s steely look backward hint at a larger connection with the victim?

* Will the broken chain of custody involving Naz’s clothes and knife somehow provide a loophole in his case?

* Does Stone’s startled reaction to hearing about Box being on the case hint that the men have crossed paths, that Box has some darker secrets in his locker, or that he’s just so formidable that it put Stone on edge?

* Is there more than meets the eye concerning the gruff supervisor of the beat cops who brought in Naz?

Your turn. What did you think of The Night Of premiere? Grade the premiere in the poll below, then add your snappy review in the comments!