On TV dramas, there often are figurative minefields. But, once in a while, there are the real kind.

The heroes of TNT’s The Last Ship (airing Sundays at 9/8c) are currently facing the latter, having sailed straight into the heart of a very deadly trap where they are surrounded by no less than “very special” mines, says series lead Eric Dane, whose CNO Tom Chandler has had to reclaim command of the titular Nathan James.

TVLINE | Going into the Season 2 finale, did you have any concern that Tom would be a “landlubber” for Season 3? Or did you know what the plan was?
I didn’t know what the plan was, and I don’t ask. I like to be surprised. But I knew Chandler would find his way back to the James. You don’t really have a show if you don’t have a ship, and I knew it was only a matter of time until he was at the helm of that thing again.

TVLINE | And he obviously prefers being out there in the middle of it, versus holding some lofty desk job.
And I never made a decision on why that is. A captain or a commander would never go on missions, would never leave his ship. Yet any time there’s a very dangerous sort of situation happening on shore, Chandler’s the first one to go. I think that’s probably because he feels so responsible for every soul on that ship, he wants to do everything in his power to make sure they’re protected. He essentially thinks that if he heads out with them on a mission, 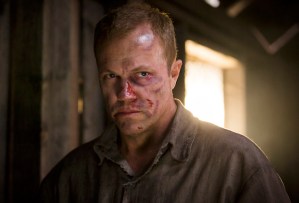 he’s doing everything he can to make sure things go according to plan.

TVLINE | What are you liking most about Season 3? Me, I’m enjoying the “war on three fronts” — Slattery (played by Adam Baldwin) and the other captives, Chandler working with the James crew to save them, President Michener (Mark Moses) and the growing political intrigue….
That’s what I love about it, that it’s so fractured right now. There are three “A” storylines happening simultaneously. Week by week, we get a little closer to each other, and eventually you have to know that the three storylines will collide.

TVLINE | Speaking of colliding: How the heck will the James extricate itself from this minefield situation? It’s not like landmines, gingerly retracing your steps with a however-many-ton ship….
Noooo. And these are very special mines. These are very special mines. We find out that the best thing is to not sit still. Sitting still could get you killed just as easily as moving forward and hitting one. We send a team out to investigate the mines, so we have a really good idea of what we’re dealing with, and then we govern ourselves appropriately. We get some help from somebody you wouldn’t think would be helpful in that capacity….. Everybody on board chips in. I think it’s honestly the best episode we’ve produced.

TVLINE | That harrowing visual made for a terrific cliffhanger.
Yeah, and [what follows] is a perfectly executed episode of television. It is a perfect 43 minutes.

TVLINE | Meanwhile, does Slattery have any new tricks up his sleeve, held hostage with the others?
They’re certainly doing their best to make it known that’s where they are, and at this point they must know we’re coming for them. 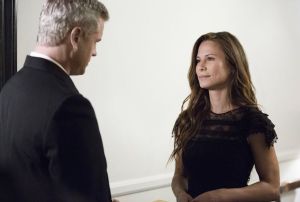 was it saying goodbye to Rhona Mitra? That was obviously a big change for the show, given how she was a key part of the first two seasons.
It was bittersweet. She did a tremendous job. In two short seasons she left an indelible impression on the audience, and her contributions were colossal as far as the story goes. But it was the next logical step, I think, given the circumstances. That when everything is seemingly perfect and back to normal, “life shows up” again.

TVLINE | Plus, as I was saying to the producers, if it came to having to make a new cure, there’s more drama in not having the brilliant Dr. Scott handy to do that.
Oh, yeah. And there’s nothing more frustrating than watching a show where it’s predictable because you know none of the main players are going to die. You get into a scrape on shore and you know the main guys will make it back onto the ship, because it’s a TV show and the regulars don’t die. On this show, people die. The characters that you invest in, the characters you love, they die on this show, because that’s real life.

TVLINE | Obviously a foundation has been laid for a past between Chandler and Sasha (Bridget Regan). Do you think enough 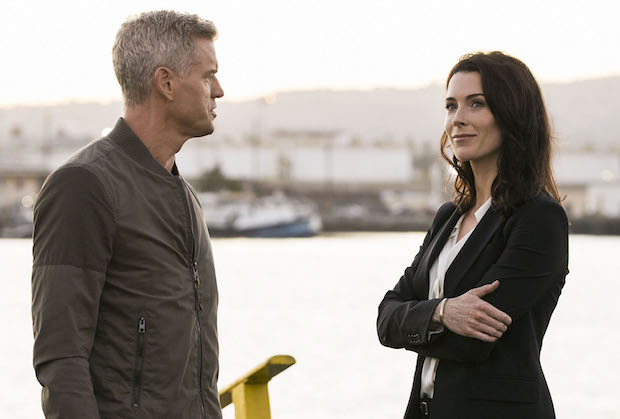 time has passed since he lost his wife that we can start taking steps in that direction?
I think that’s the plan. I’ve always sorta seen Chandler by himself in a cabin in the woods with his kids, chopping wood. But I think it’s time. The passing of his wife Darien has run its course. I don’t think [romance is] the first thing on his mind, but if it presents itself, I think he would entertain it.

TVLINE | The logline for the season finale sounds like a mano-a-mano situation between Chandler and the ultimate Big Bad.
Well, we come to find out that not all of the bad guys are bad, and not all of the good guys are good.  Over the course of these next three episodes, you get it all.

TVLINE | Is there story for any possible Season 4…? Is there a place to go after this?
Yes. There is. We know where Chandler is going to be at the beginning of Season 4.

TVLINE | So, this isn’t a tidy three-season story.
Well, it is if the network doesn’t renew the show. I think the season finale will be really satisfying [if it’s a series finale], but there’s always somewhere to go. A network doesn’t ever want just three seasons of a show and then “call it a day” — unless the show is tanking, and then of course they’ll pull the plug. But we have an idea what the first five seasons look like.

TVLINE | Lastly, how has this been for you as your first, big, post-Grey’s Anatomy swing? Was it what you wanted it to be?
It has been, it really has been. It happened a lot quicker than I thought it would. I thought I would take more time off, but I left Grey’s and pretty much started working on The Last Ship within a month. Of course, the series then aired a year later. But the needle is still moving in the right direction for me, yes!