Is Agents of S.H.I.E.L D. ready to “do the robot”? Which Once Upon a Time couple is off on an adventure? What mystery did Person of Interest leave behind? Read on for answers to those questions plus teases from other shows.

What is going to take up more A-plot on Agents of S.H.I.E.L.D. this season — tracking down Daisy, or the LMDs? —Maura
This much I can tell you: LMDs are happening. Specifically, the ABC series at this time is looking to cast the recurring role of Aida, a “very attractive” robot (because after all, why make a homely one?) who moves about quite naturally but speaks a bit formally, like Iron Man’s Jarvis. Also to be introduced in Season 4: a pair of Latino brothers, one of whom is always the most dangerous person in the room, the other paralyzed in a wheelchair. 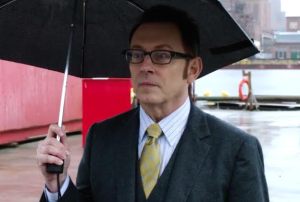 to be withholding any Person of Interest scoop from us, would you? —Ashley
Silly Ashley, the series has ended!

(Psst, as a matter of fact…. I found this a bit curious: When I interviewed Michael Emerson to preview the series finale — which I had already seen — he asked for my take on, “Who’s that dark-haired guy that gets on the motorcycle, in the closing montage?” And yet no such scene made it into the finale. When I asked the producers about this “mystery motorcyclist,” they had a good chuckle about Emerson not sticking to “talking points”… and then clammed up. Make of that what you will.)

So much Supernatural news this week. Dare we ask for more? — Dee
Dare away! During Vlada Gelman’s recent chat with the “brothers,” Jensen Ackles said he plans to break his recent streak of directing an early-season episode, explaining, “I just decided to take the first part of the season easy. Twenty-three episodes [per season] is a long, long shoot, and I usually would direct the first episode that we would film… so it’s basically like sprinting the first several miles of a marathon, which doesn’t really work if you’re a good runner. You want to pace yourself, so I’m going to pace myself this year.”

Any scoop on Patrick J. Adams’ return to Legends of Tomorrow as Hourman? —Jim
Not really, and not for a lack of asking Adams himself. “I have no idea what’s coming up. I haven’t seen anything,” the Suits star told me at the USA series’ recent premiere party. “I just know that I’m there to introduce the concept of the Justice Society of America and bring that into the show.” Adams then geeked out more than a little over his multi-episode turn as a superhero. “It’s so cool [to wear the costume]. It’s the dream,” he shared. “I only got a little taste of it [in the finale], so like an addict I was like, ‘I want to do more!'”

Any info on the final season of Rizzoli & Isles? Specifically, will Tommy and TJ make an appearance? —Katie
Good news, Katie — I can confirm that both Tommy and TJ will be seen again before the TNT drama fades to black.

Do you know the exact dates of the series finales of both Rizzoli & Isles and Royal Pains? I love these shows and really don’t want to miss finale episodes. —Joanne
Pay attention, because USA Network’s Royal Pains wraps its eight-season run this Wednesday, July 6. TNT’s RizzIsles, meanwhile, is currently penciled in for a Sept. 5 series finale. 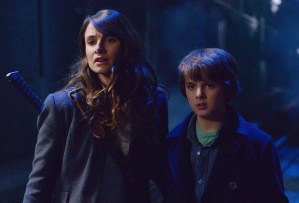 tell me when the next season of The Strain is coming on? —Cathy
In addition to reminding you that the FX horror series is back on Sunday, Aug. 28, I can offer this teaser from Max Charles, who plays Zack: “At the beginning of Season 3, New York has fallen and the government has given up,” the child actor told us at the Saturn Awards. “That leaves the people of New York to fight to save themselves.” (Which pretty much sums up any summertime ride on the subway, really.)

Do you have any scoop on what’s going to happen to Once Upon a Time‘s Belle and Rumple? Will they be going on an adventure for the first time together? —Rebecca
They will be going on an adventure together… or as “together” as they can be with Belle still stashed inside a decorative container. “Belle is with Rumple — she’s in Pandora’s Box, in the sleeping curse,” says Once co-creator Eddy Kitsis. And as the Season 6 premiere will make clear, Rumple did get said box back, as part of his deal with Mr. Hyde. As for where the “information” Hyde delivered in return, to rouse Belle from her slumber, will lead the couple, “That will be the mystery that we show you,” Kitsis says. Adds co-creator Adam Horowitz: “What we really focus on at the start is: ‘How the heck does he get her out of the box and wake her?'”

Any updates on Major Crimes? — Jonni
During my Season 5 preview with James Duff, he warned of a “dark episode” on the horizon that involves “a massive courtroom shooting that we deal with,” adding: “It’s a very scary scene.”

Quick question about my favorite summer/Canadian show, Motive: Will there be another season on USA Network? —Kaiulani
This “scoop” got trickled out in last Sunday’s What to Watch column, but yes, USA Network will be airing the Canadian drama’s fourth (and final) season starting this Sunday at 10/9c.

Any scoop on Pitch? —Ethan
My First Impression on the new Fox drama is “on deck” (so to speak), but for now I will say this: It’s a very different pilot when watching it a second time. Also, a true story first shared on the Twitter: I did not recognize Mark-Paul Gosselaar on first viewing, he disappears into his role/neckbeard that good.