The NCIS team will return 88 percent intact this fall, now that the four remaining cast members whose contracts were up have re-signed.

Original cast members Pauley Perrette and David McCallum, as well as Sean Murray and Rocky Carroll, have each re-signed 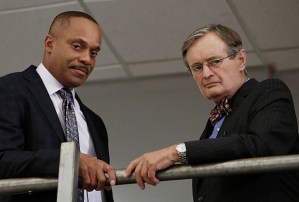 for Season 14 and 15, our sister site Deadline reports.

Series front man Mark Harmon inked his own two-year extension back in February, while Brian Dietzen and Emily Wickersham are on different contract cycles.

The four re-signings come on the heels of Wilmer Valderrama (That ’70s Show) joining NCIS as a new series regular for Season 14, and a month after original cast member Michael Weatherly made his final appearance as Special Agent Tony DiNozzo, ending his 13-year run in the role. (The status of Sarah Clarke and Duane Henry, who recurred toward the end of Season 13, is TBD.)

Weatherly next stars on the new CBS drama Bull, which will air Tuesdays at 9/8c, following NCIS, starting Sept. 20.

Want scoop on NCIS, or for any other show? Email insideline@tvline.com and your question may be answered via Matt’s Inside Line.