Do you remember the second season of NBC’s Smash? Pepperidge Farm remembers. And, unfortunately, so does Leslie Odom, Jr.

The actor, who won his first Tony Award on Sunday for his work as Hamilton‘s Aaron Burr, was a guest on Monday’s Watch What Happens Live, where host Andy Cohen managed to squeeze out his honest opinion about the NBC drama’s second (and final) year.

“Hey, Leslie, Remember when you were on Smash?” asked Hamilton, the shady gay pig (easily my favorite WWHL character to date, by the way). “Be honest: How would you rate the second season of Smash on a scale of one to 10?” 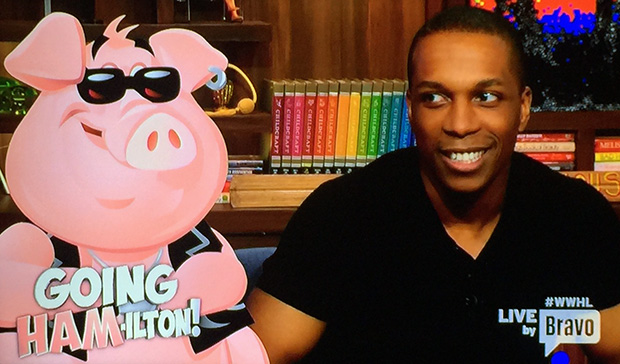 If Odom could have immediately bolted from the studio, leaving an Aaron Burr-shaped hole in the wall, believe me, he would have. Instead, he turned to fellow guest Nick Jonas — who appeared in two episodes of Smash‘s first season — and asked, “Is that the season you were on?” (It wasn’t.)

But Cohen wasn’t about to let Odom get away that easily. Finishing where Hamilton left off, he pushed the Tony winner for an answer, eventually getting him to settle on a three — and to admit it was, generally, “not that great.”

Do you agree with Odom’s assessment, or does your opinion differ from his (and the network’s, the critics’ and pretty much everybody else’s)? Whatever your thoughts, drop ’em in a comment below.