There are some new additions to the “menu” for Season 2 of CBS’ Zoo (premiering Tuesday, June 28 at 9/8c), and TVLine has your first look at two of ’em.

In Season 2 of the summertime drama (based on the novel by James Patterson), the danger escalates as the animal mutation moves to Phase 2 and they begin attacking infrastructure and creating deadly environmental phenomena in an effort to make the planet uninhabitable. Meanwhile, the team discovers a shocking mutation that threatens the life of one of their own.

Among those joining the fight, in the above photo you see Josh Salatin (The Carrie Diaries, Show Me a Hero) as Logan, a stranger Jamie (played by Kristen Connolly) encounters who might be holding a dangerous secret from her. Says James Wolk, who’s back as Jackson Oz, “The audience won’t be sure where Logan stands — is he with the team or is he against us?”

Meanwhile, Alyssa Diaz (Ray Donovan, Army Wives), seen below, plays Dariela, a member of a military unit that encounters a strange and troubling new development in the animal mutation. “She comes in and joins us in our mission,” Wolk previews. 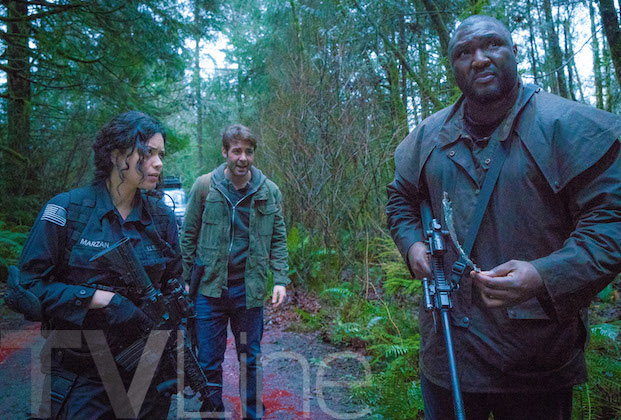 Also new to the mix, as first reported by TVLine, is Warehouse 13 alum Joanne Kelly as Allison Shaw, the Deputy Secretary of Defense who is actively seeking a solution to the animal crisis — and “who is related to one of our characters,” Wolk teases.

“My favorite part of television is characters, watching people interact,” Wolk shared with TVLine Monday at a CBS summer press event. “And this year we have three new great characters that are entirely different and add to the show.”

Want more scoop on Zoo, or for any other show? Email insideline@tvline.com and your question may be answered via Matt’s Inside Line.