Outlander‘s war, what is it good for? Leaving our heroine curled in the fetal position, apparently.

This week’s episode of the Starz drama delves into Claire’s experiences in World War II, which turn out to have been even more ghastly than we might’ve realized. Unfortunately for Lady Broch Tuarach, she’s not likely to be in any more comforting of an environment for some time to come, because Clan Fraser is officially marching off to battle.

Not that I don’t love impending bloody carnage and soul-crushing loss as much as the next girl, but knowing what’s to come, how about we focus on some lighter fare for the moment? Dougal, Rupert and Angus are back — though Jamie might wish that weren’t the case — and we become acquainted with the boy who will become the man known as Lord John Grey. As Oldlanders know, this is a verra good thing, indeed.

GETTING THE GANG BACK TOGETHER | Jamie, Claire and what’s left of their contingent arrive at Perth to rendezvous with Murtagh and pretty much everyone else. As Claire’s voiceover informs us, a bunch of Lord Lovat’s men deserted along the way, so Young Simon was tasked with trying to bribe them back into the fold. Murtagh gives the Frasers a little good-natured ribbing about being five days late, and then — wait, that wink was at Claire, right? I’m going with Claire. #Clairetagh4eva

Fergus acts like a big, curly-haired Labrador puppy when he sees them, and then Rupert and Angus are there, as well… so you know that means Dougal can’t be far behind. Claire’s surprised that the three men have broken with Colum’s desire to keep Clan MacKenzie neutral, which prompts Dougal to launch into the first of many “for glory, for Scotland!” speeches. Mistress Fraser rolls her eyes hard, and with relish.

The “army,” such as it is, needs a lot of training. So rather than follow Dougal’s desire to march off and battle the Brits alongside the rest of the Jacobite forces, Jamie decrees that they’ll camp where they are until the ragtag bunch of volunteers learn how to fight as one. Dougal acts like he’s kind of OK with that, but he’s verra much not OK with that. 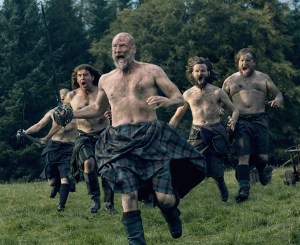 LOADED FOR BARE | How do we know? Because as Jamie’s putting the fear of God into his men, telling them horror stories from his time fighting in France, Dougal, Rupert and Angus come screaming down upon them, shirtless, muddy and demonstrating how warfare is done in the ancient Highland tradition. On a related note: Did someone change the MacKenzie battle cry to Tulloch Hardbody? Because damn, Dougal!

Well-aged washboard abs aside, Jamie is irked by his uncle’s refusal to let his nephew lead. “I ken what these men will face, and I know how to prepare them for it,” Jamie says with barely restrained anger. “Ye don’t.” And though Dougal appears to back down, he’s merely changing tack: He later tries to get Claire to lobby Jamie on his behalf, but she basically tells him to stick a bagpipe up his bahookie. She correctly susses out that Dougal doesn’t want glory for Scotland, he wants power for himself. And to that, she says: “F—k yourself.”

WAR IS HELL | Yes, Jamie’s narcissistic uncle probably deserved that, but Claire’s a wee bit testy this episode, no? Turns out that being around all of the men preparing for battle has dredged up a very traumatic memory from her own time in World War II, in which some American soldiers with whom she was friendly were killed during a German ambush while she lay, helpless, in a trench nearby.

Her PTSD manifests itself in uncharacteristic quietness, then a higher-than-normal number of f-bombs dropped, then ultimately in a full-on panic attack that leaves her balled up behind a wagon, palms pressed to her ears. That’s where Jamie finds her, whispering, “Please, shut up” to the memory of a dying Allied soldier screaming for his mother.

After Lady Broch Tuarach has pulled herself together, she realizes that she buried the nightmare: “I just closed the door on that night. Walked away,” she tells her husband, who is very understanding as he suggests that she should go back to Lallybroch in order to get away from the fighting. But she refuses, saying that returning to Jamie’s family home will be like being back in the ditch again, “helpless and powerless to move, like a dragonfly in amber. Except this time, it’ll be worse.”

You guys know already that I’m a fan of the little things Caitriona Balfe and Sam Heughan do to make the Jamie-Claire relationship sing; for that reason, I won’t wax too poetic about the look Big Red gives his lady as she says she’s not going anywhere. It’s a gaze full of love, solidarity, respect, a teeny bit of amusement and an insane amount of pride — and it all happens in a microsecond. He agrees that she should stay with him, then promises that she’ll never be left alone again. They kiss, and it’s a good one.

MEET JOHN GREY | OK, back to Dougal’s asshattery. He goes on an unauthorized walkabout and brings back a handful of “volunteers”… who Jamie quickly realizes have been threatened into joining the Jacobite army. After releasing the men from their conscription, Fraser orders the men on sentry duty — who clearly weren’t doing their job, considering Dougal’s huge group of armed men just waltzed into camp — to be whipped as punishment in the morning. Along the way, Jamie stands and intones, “I’m James Alexander Malcolm MacKenzie Fraser. I command this army,” and I’m sure there are things that are sexier, but I’m having trouble thinking of any of ’em right now. 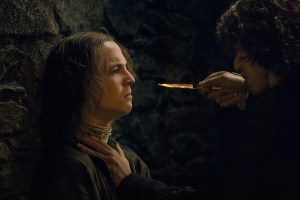 Anyway, later that night, Jamie is peeing when he’s attacked by a teenage member of the British army — marking the first time (but certainly not the last) that Lord John William Grey tries to get his hands on Jamie’s sweet D. I mean his dirk, aka his knife. Why, to what did you think I was referring? Those of you who’ve read ahead in Diana Gabaldon’s novels know that the young attacker, who introduces himself as William Grey when pressed, will become a major character as the years go on. But for now, he’s just a scared kid whose attempt to infiltrate the Jacobite camp went horribly wrong. Oh, and Jamie broke his arm. 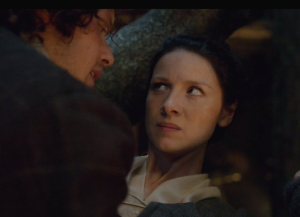 Still, Grey is “quite prepared to die,” he announces, and won’t give up any details about his unit’s movements until Claire wanders over and pretends to be Jamie’s captive; when Jamie says he’ll spare Claire’s virtue if the boy spills what he knows, Grey relents. (A little too early, in my opinion, because watching the silent looks Mr. and Mrs. Fraser shoot each other during the farce — including after she knees him in his standing stones — is pretty fun.)

“I give you your life. I hope you use it well,” Jamie says, releasing the boy. But young Grey is going to have the last word, which is quite ballsy, considering the circumstances: He vows to pay back the debt… then kill Fraser. “Then I must hope, sire, that we do not meet again,” Jamie says, clearly tickled by the kid’s pluck. “A Grey does not forget an obligation, sire,” Grey replies.

CANNON MARAUDER | Sooooo…. who was on watch and missed the intruder this time? That would be Dougal and his men, but Jamie points out that the unshielded fires drew Grey’s attention, so he — as commander — is responsible, too. So he asks Murtagh to whip him, as well. Wait, isn’t poor Jamie’s back basically a piece of wet paper towel by this point? Is this really a good idea? But he doffs his shirt and takes his punishment, proving to his men that no one is exempt from responsibility. And when that’s done, it’s time to raid Grey’s camp! Huzzah! Except for you, Dougal. You’re still in the naughty corner.

So Fraser and his men rub soot on their faces and sneak into the enemy encampment to steal the pins from their cannons and abscond with the wheels from the cannon wagons. It’s a huge success, and when they’re back, Jamie triumphantly climbs on top of his sleeping wife and happily kisses her. While I’m wondering how none of the schmutz on his face gets on her, he tells her to get dressed, because they’re about to take off. Claire (and I) lament that she was pretty sure she was going to get a little victorious lovin’, but Jamie says there’s no time. (Side note: If Dragonfly in Amber taught me anything, it’s that there is ALWAYS time for a quickie, no matter the circumstances. #justyouwait)

When Jamie and his group arrive at the Prince’s camp, Jamie throws Dougal a bone and allows him the honor of riding ahead to announce their arrival. The war is officially on.