“As interesting as the ways that [TWD showrunner] Scott [M. Gimple] & Co. are able to shift the comic book narrative and really explore that, there is no Fear TWD” in that universe, Fear TWD executive producer Dave Erickson tells TVLine. The spinoff “didn’t come from the comic, so some tectonic plates would have to shift to make [a crossover] happen.”

There’s also the little matter of location, location, location. Since Fear TWD is set on the West Coast, “from a geographical standpoint, it’s going to be very difficult for us to ever get to the East Coast,” Erickson notes. “And from a narrative standpoint, with [TWD] being six seasons in and going on seven, I don’t think we’ll ever quite catch up with them, so chronologically, it would be difficult as well.” 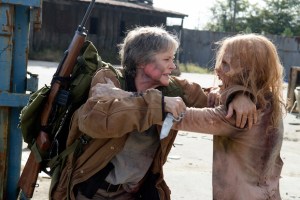 Which is too bad — a meeting between TWD’s embattled survivors and Fear TWD’s dysfunctional blended family might win over some of the spinoff’s detractors. “I don’t know the stats, but I think there are people who do like both shows,” says Erickson, adding with a laugh, “I think there are, like, seven people on the planet who haven’t seen TWD, and we’ve got those guys.

“My hope is that at a certain point — and it’ll probably never happen — but if we stay on the air long enough, people will stop comparing the shows as much,” he continues. “I don’t think that’ll ever go away, but they are two separate stories with similar rules taking place in the same universe that was created by Robert [Kirkman] in the comics. There’s room for two shows that have their own tone but are different in terms of characters and locations. That would be my hope.”

What do you think? Will fans — will you — ever give up comparing TWD and Fear TWD? Hit the comments.