The 100th episode of CBS’ Person of Interest did a real number on fans, bookending a thrilling action sequence with two tragic blows.

Having blown his cover identity by unwittingly frequenting the same cafe he visited with Grace 10 years ago, Finch was stashed away by Elias at a meth lab protected by rival gangs. Alas, the gangs’ temporary truce did not go unnoticed by Samaritan, who dispatched agents to put a bullet in Elias’ forehead and then grab Finch. Root and Reese, joined by Shaw, intercepted the car carrying Finch, after which Root whisked Harold away, with Samaritan giving chase. Root would use some nifty gunplay (and driving) to neutralize the threat, only to later take a bullet meant for Harold, fired by Samaritan noob Jeff Blackwell. By episode’s end, Root succumbed to her injury, while The Machine — now communicating aurally, using of course Ms. Groves’ voice — sprang Harold from jail.

“We wanted Root to go out like a champ, frankly — not out with a whimper,” co-showrunner Jonah Nolan tells TVLine. “She goes out swinging f–king hard.”

TVLINE | For starters, why Root? Why was she the big loss entering this final salvo of episodes? 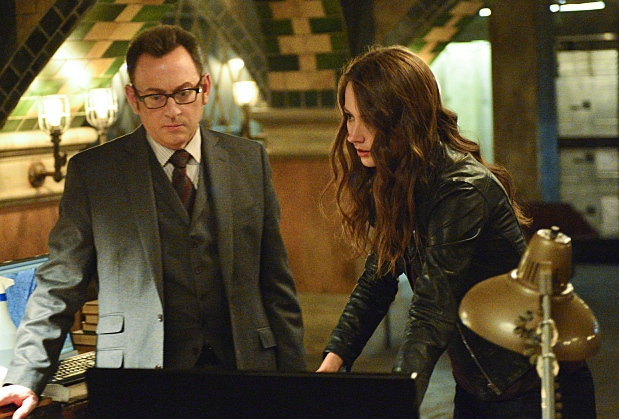 GREG PLAGEMAN | Root has always implored Harold Finch to make his machine more assertive in this war, and now, faced with what they’re up against, Root ultimately is the one who makes the sacrifice to save the father of The Machine, and that’s Harold. I think it’s true to Root’s character — her first love was The Machine. She always believed people were “bad code,” and more than anything she wants Harold’s machine to win this war. Her going down in this matter seemed apropos.

TVLINE | She did go down in a blaze of glory, after making one of the sickest kills in TV history.
JONAH NOLAN | Yeah, I was holding onto that one for a movie, but I decided Amy Acker was worth it.

TVLINE | I couldn’t tell, did that guy in the SUV turret get decapitated, or was he just conked on the head by the flying hood?
NOLAN |  You know what, I’m still upset about this. We did have a dummy in place for a decapitation. On CBS, boobs not so much [are allowed to be shown], but decapitations potentially. But we ran out of time on the day. We also didn’t want it to detract from the gigantic explosion of  it all.
PLAGEMAN | I think I was more impressed by her handling that sniper rifle and [steering] the wheel with her boot. Jonah and I felt very strongly that we needed to make something that our daughters could aspire to.
NOLAN | [Laughs] A real role model moment there!

TVLINE | That sequence did not look inexpensive.
PLAGEMAN | That was the other big thing about this episode!
NOLAN | Greg was busy prepping [to direct] 12, and the production team in New York had been very grateful that I had been busy with [HBO’s] Westworld for a couple of months, but this is an episode I had very strong feelings about. So I came back like a bad penny, and the early-run budgets on this were like… 400 percent over? Poor Greg was trying to prep his directorial debut, which is f–king magnificent, and I was eating into his budget with the expansiveness of what we planned for Root’s bon voyage, this berserk enterprise. Fred Toye directed the episode, after he also directed an episode of Westworld….
PLAGEMAN | He robbed a few banks, too, to get more money.
NOLAN |  He shot his last day on Westworld Episode 6, jumped on a red-eye and was in his second day of Episode 100 on POI. He was an absolute champ. He shot two killer episodes of TV, and we were in constant contact. He’s still a little upset with me because of the scope of what he was asked to shoot on both shows. But yeah, this episode of POI is one of my favorites we ever shot. It looks fantastic and it’s beautifully done.

TVLINE | Did you assign any additional value to “Episode 100,” or was it equally important as one of the final season’s precious 13 episodes?
PLAGEMAN | Given the gravity of the loss that we knew was coming, we had to earn it. And I think, it was extremely exciting. We always wanted to explore another side of Michael Emerson’s character, when he had finally had enough, and it felt like a big episode, emotionally for our characters, and it felt like a major turn for one of our main characters.

TVLINE | In the million months since you filmed this episode, a controversy arose about TV shows killing off LGBT characters. But I think that in your defense, Root was a richly realized character, over four seasons. And as you have said, she died meaningfully.
NOLAN |  Thank you for that. We haven’t seen these other shows [that killed LGBT characters], so I can’t speak to that, but it’s really just about characters getting their due and not feeling disposable, and not feeling like the audience’s investment in a character is being used against them, or that they’re being set up for it. This was always the end of Root’s story, this was always where we were going. It became clear at the beginning of the season that this was the end of the ride for us… and Root’s journey has always been getting ever closer to The Machine, so the end of her story was always basically becoming The Machine. That’s another thing I thinks separates this from the pack, and this is how Root feels about it — it’s an evolutionary step. We’re not trying to sucker-punch the audience.
PLAGEMAN | We’re aware of the objections now to that [“Bury Your Gays”] trope, and I think we circumvent that in many ways. This is a real relationship between [Root and Shaw]. Not only was it consummated but there are real feelings there in subsequent episodes. Not to mention, as Jonah said, we’re heading down the final stretch here. This is not the only loss that Team Machine is going to encounter.

TVLINE | On the topic

of consummation, although what we saw a few weeks ago was just a simulation, did I read somewhere that you said Root and Shaw actually first got “together” in Season 3, Episode 6…?
NOLAN |  We definitely implied as much at various moments. Look, we’re on CBS, there’s only so much we can show, a lot of that is left to the imagination.

TVLINE | But would people be correct to say that Root died before having been with Shaw?
PLAGEMAN | That’s an extremely literal and sad interpretation. [Laughs]
NOLAN |  You’ve got to fill in the blanks a bit, but 306, “Mors Praematura,” was an episode that hinted as much. That’s left for the audience to decide. But I certainly wouldn’t feel like their relationship went unconsummated in any sense of the word. 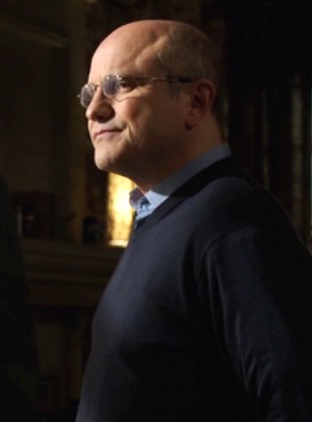 went out as a hero. How important was it for you to “resurrect” him and get back Enrico Colantoni, if only for a short bit?
NOLAN |  Enrico Colantoni is a f–king magnificent actor, and has been such a fun collaborator for us over the years. We’ve always managed to make it work, when he’s available, and he’s had some great moments here. It was always the plan to fake his death and bring him ever closer to our team. If there’s one thing about the season I regret it’s not having a little more time to play with relationships like these, and spend a season with him on our team. But again, we’ve had to get to the end a little sooner than we wanted. We wanted to spend a little more time with Elias all the way inside the team, though we’d have to be careful with that — Elias isn’t much of a joiner! [Laughs] But that relationship between him and Finch has been so much fun to develop over the years, from the sort of chess conversations to really bringing him all the way in. The idea in this episode was that it’s almost like an avalanche of grief and loss bearing down on Finch, and the cumulative impact of it for Finch is watching as this set of decisions that he’s made, this sort of plan that he has held into all of these years, comes literally to grief with the death of two of his allies and friends.

TVLINE | The Machine actually speaking at the end, springing Harold from jail…. I almost feel like that’s Rocky getting up from the mat before pummeling Apollo Creed. Is our team about to rally?
PLAGEMAN | I got chills, man. One of the things that Elias really served to do…. When a character with that power says to Harold Finch, “You’re the one that people should be afraid of,” he gives that a certain weight and heft that we understand something’s coming for Harold Finch, because Elias told us so.
NOLAN | And at Comic-Con three years ago, when asked, “When will The Machine get a voice?,” we did say, “Someday, but you won’t like how it happens.” I think we fulfilled that mandate.

TVLINE | Lastly, and for what it’s worth, I’ve enjoyed getting two to three episodes a week this final season. It’s been quite a charge. Not so much a “burn-off.”
NOLAN |  Oh, that’s cool. We said this in an interview a few weeks ago, that it’s not a “burn-off.” I guess we’re supposed to feel slighted, but no, for the fans who engage in the show, it was always agonizing for us waiting for them to get to see episodes. Like, I’ve been waiting for people to watch Episode 4, and Episode 10, and Episode 12 and 13 of this season. These are hallmark episodes where our story makes big changes, so it’s a lot of fun for us to have the fans “shotgunning” the whole season like this. Like you said, it’s a charge.

What did you think of POI 100, and how Root and Elias were killed off?