Hulu will explore the world of 18th-Century Harlots, as the Stateside streaming home for a new series that will air in the UK on ITV.

Set against the backdrop of Georgian London, Harlots is described as a powerful family drama offering a new take on the city’s most valuable commercial activity — sex. Based on the stories of real women and written by Moira Buffini (Jane Eyre), the series follows Margaret Wells (played by Minority Report‘s Samantha Morton) and her daughters, as she struggles to reconcile her roles as mother and brothel owner. 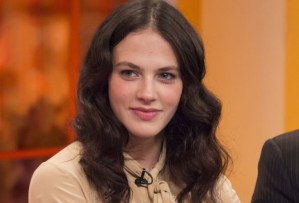 comes under attack from Lydia Quigley (River‘s Lesley Manville), a rival madam with a ruthless streak, Margaret will fight back, even if it means putting her family at risk. Jessica Brown Findlay (Downton Abbey, right) plays Charlotte, Margaret’s eldest daughter and the city’s most coveted courtesan who begins to grapple with her position in both society and her immediate family.

Filming on the eight-episode order begins this June in London.