When it comes to soul mates, “maybe you only get one,” a forlorn Alex suggested to Meredith in Thursday’s Season 12 finale of Grey’s Anatomy. So who was his, then?

Considering that his girlfriend, Jo, had just turned down his proposal of marriage — and had refused to offer up any explanation for why — Karev thought that perhaps he had been wrong about her after all. Perhaps instead, his ex-wife had been The One. “Izzie?” replied his Person, incredulous. “Alex, Izzie wasn’t your one true love.” 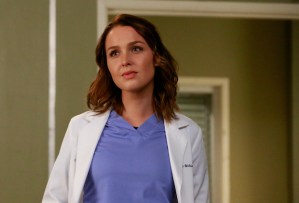 Of that, Mer seemed to be absolutely sure. But us? Eh, not so much. So we’ve decided to put the question to the experts — you Grey’s fans. Do you think that Alex’s one true love is Jo, the young resident who is risking losing him rather than reveal that, the whole time they’ve been together, she’s been secretly married to an abusive husband? Or do you think that his one great love was Izzie, the fellow doc whose Dear John letter sent him to the cardiac unit with a broken heart?

Vote in the poll below, then hit the comments with a compelling case for why you voted the way you did.