The good news — for “Dawsey” shippers, at least: After rejecting the temptations of his political consultant, Casey showed up at Dawson’s door, seemingly cementing their future. But how will he feel about raising a child together now that Dawson has officially become Louie’s foster parent?

As for the bad news, sorta-couple Severide and Stella Kidd get it on while, unbeknownst to them, her unhinged, knife-wielding ex-husband, Grant, sat in the next room. Elsewhere, Jimmy went after boss Boden for his brother’s recent death.

TVLINE | Where does Casey and Dawson’s relationship stand now?
They’re on solid footing. We obviously had played “Will they?/Won’t they?” and “Are they?/Aren’t they?” and we didn’t want to have it become tiresome. So we wanted to put them back together. It was the subject of some fierce debate in the writers’ room in terms of, in the 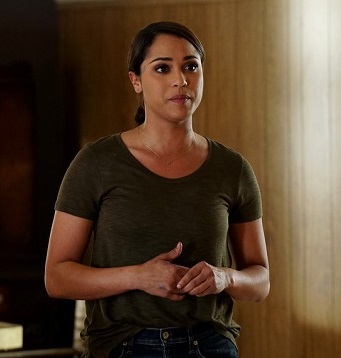 finale, does he respond to the little bit of catnip that the political consultant has laid out for him, or does he go back to Dawson? To have him go back and knock on the door was really heartwarming in the midst of a lot of other stuff that’s pretty heavy. They’ve been through the wringer, emotionally. It just felt like it was the right time to bring them back as a couple, firmly, because they’re really the heartbeat of the show, and also to give this storyline to Dawson, where she’s pursuing trying to care full-time for this kid.

Obviously, going forward, there’s complications for that kind of situation. Who are the birth parents, what do they want, when do they want it? So there’s conflicts forthcoming, but it doesn’t break the resolve that she has to be a parent and the resolve that they have as a couple, which was a real choice, like I mentioned. We definitely explored both versions – does he go up and see the new political consultant, who’s whispering in his ear and saying all the right things? Or does he go back? As the heartbeat of the show, we didn’t want to really cleave that [relationship] in half permanently, because if we had, there’s really no going back.

TVLINE | What is Casey’s stance on Dawson fostering Louie? Is he going to be more involved in that?
He’s going to be more involved, because before he was a little flatfooted and said, “I can’t help out.” So in principle, [now] he is saying, “Yeah, I’m in.” But when the rubber meets the road, and you’re dealing with real complications, that’ll be the true test — when he’s actually faced with the reality of what it’s like to try and foster and, ultimately, adopt a kid whose birth parent may have had a drug problem. Also, by knocking on her door, he’s kind of rejected [the possibility of] seeing if he could ascend politically. He’s honoring what he said at the outset, which is, “I’m a firefighter first and alderman second.” And now he’s an alderman third, really. He is a boyfriend first, firefighter second and alderman third. 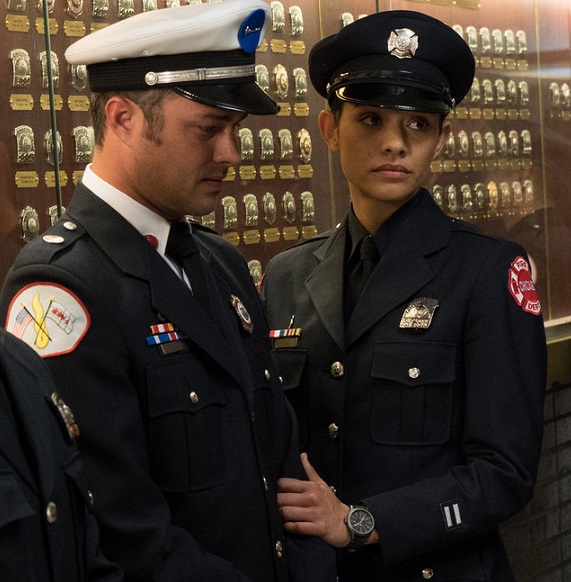 TVLINE | Stella and Severide have been heating up, but her ex is a real issue for them. What does their future look like?
It’s promising, and based on what we’ve seen, these characters are really kind of made for each other. There’s real chemistry. We want to explore that. It’s just a matter of when it can be explored, because we want to play that this complication from her ex is a real complication. It’s a knockdown, drag-out fight between Severide and Grant, and you can probably guess who wins. But in doing so, it complicates the interaction with Kidd, because there’s some blame in terms of, “Why was this guy here? And what am I getting drawn into?” They have to take a break from each other, and he has to go on his little walkabout without her. But throughout that, there is a real sense of, hopefully, longing to see these two back together. When we do it, we’ll do it right.

TVLINE | Severide’s had his fair share of love interests over the course of the show. Do you want to keep him open to different relationships, or might there be one person with whom you’d eventually like him to settle down?
It’s just always a matter of, if we find somebody who he really clicks with, we would explore that as a relationship, and it so happens that there’s a real chemistry [with Kidd]. So we’re not thinking, “Well, that’s not his M.O., so we’ve got to kick her to the curb, so he can keep on being a playboy.” We take it on a case-by-case basis. So we’ll see when we finally get them together what it’s like.

TVLINE | Jimmy’s gotten himself into a tricky situation with Boden. How would you categorize his position at the firehouse?
It’s tenuous, because if there was the equivalent of a death match between two characters going into next season, it’s between Jimmy and Boden. Jimmy is convinced that Boden was negligent and led to the death of Jimmy’s brother. [He] is going to go to any length to try and get Boden’s job. Boden, though sympathetic to Jimmy, isn’t just going to roll over because of Jimmy’s pain. It comes down to one of them has got to go.

Chicago Fire fans, what did you think of the season ender? Grade it via the poll below, then hit the comments to back up your pick!