Warning: This post contains spoilers for the Quantico season finale.

Quantico on Sunday wrapped its season-long mystery — who was really behind the Manhattan bombings? — tighter than a NAT’s henley left too long in the clothes dryer.

As revealed last week, Liam was the driving force behind the carnage originally blamed on Agent Alex Parrish… but he wasn’t the only one. So after we watched a quick rewind of Liam’s whereabouts while pulling the whole shebang together (set to a pretty great orchestral arrangement of Peter Gabriel’s “Digging in the Dirt”), we witnessed Alex & Co. realize that their former teacher was their current nemesis — and then hunt him down before he could set off a nuclear bomb at that year’s FBI academy graduation.

Why did Liam want to destroy the FBI? To cut off the head of a corrupt organization, to spill blood so all of the lying and rewriting of history could end. (We didn’t say it was a sane motive.) Alex and Ryan eventually take him out by shooting him multiple times — once between the eyes — in a Quantico dorm.

But the gang soon realizes that Liam’s bomb can’t be defused, and really terrible stuff is about to go down. So Simon grabs the device, jumps in a car and sacrifices himself by driving the nuke off a bridge so its destruction and fallout will be contained underwater.

At Simon’s funeral, Alex has deduced that now-vice president Claire Haas was in on Liam’s insanity… and when the politician doesn’t deny it, Caleb overhears everything. Later, after Alex has been let go from the FBI for being too recognizable (?), she is recruited by a mysterious man who offers her another gig: a position at the CIA. As the episode ends, Alex is poised to give the man her answer.

So what did Alex decide? And what will Season 2 of the ABC drama look like? We went straight to showrunner Joshua Safran for some answers.

TVLINE | I know you’ve said the terrorist always had to be Liam. But was there ever thought of him having an equal partner? Or was it always just him?
There is, not an equal partner, but there is a partner at the end of the season. So the discussion was the two of them. But no, it was always Liam. [Laughs]

TVLINE | Speaking of which, is the idea to have Claire Haas to be an integral part of next season?
The hope would be that Marcia would come back and be part of our world. It’s very clear that she pays a price, which is that her son knows about her now.I’d like to say that you’ll see her moving forward. We’re just getting into those conversations now. It’s on purpose that she’s out there and it’s this thing that Caleb knows and Alex knows and other people know, but nothing can really be done about it because there’s no actual proof — again, getting into the shades of gray that have been the whole raison d’etre of the show: It’s never black and white, you’re never good or evil, going all the way back to her father. 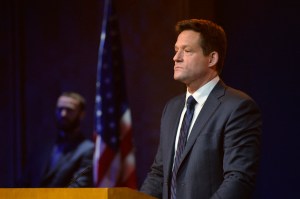 TVLINE | You held off on telling Josh Hopkins that Liam was the ultimate culprit until about three-quarters of the way through the season. How did the rest of the cast react when they found out?
[Laughs] They were really excited it wasn’t them… Josh and Jake [McLaughlin] and Graham [Rogers] are always f—king with each other, so once I told him, all he really cared about was how we could f—k with Graham before we announced it… Everyone was relieved. I will say that Tate [Ellington] knew he wasn’t the terrorist way back. I told him way back in the year, because I knew all the emotional stuff he was going to have to do, so I wanted him to know that he wasn’t the terrorist. Priyanka [Chopra] always knew it wasn’t her. I told Yasmine [Al Massri] and Johanna [Braddy] earlier than others because they had to do certain things that I wanted them to be aware of. I stepped it out. I think the last people to know were Jake, Graham, Josh and Aunjanue [Ellis].

TVLINE | Simon’s storyline this season felt as though it were always building to this final scene. Did you have his heroic death in mind right from the beginning?
Simon slipped the noose a lot throughout the year. Tate is one of the best actors I’ve ever worked with and one of my favorite people I’ve ever met in my entire life. So losing him from the show was really difficult for everybody. It still is. We still talk about it: We know it was the right thing, but it still feels terrible because you’re losing such a good part of your family. But it felt like there was no other way. In fact, we had many other people in that car, but we kept coming back to Simon because that was the only person that felt right. His was a tragic arc leading to redemption no matter what, whether it lasted one year or five years. That would always be where he would end up. Then we just couldn’t shake the fact that it had to be him in that car.

TVLINE | Who else did you think of putting in the driver’s seat of that car?
Pretty much, we cycled through everybody, everybody that wasn’t Alex or Ryan. It didn’t make sense. We had Raina in the car. But it didn’t make sense. The pitch initially was Simon in the car. It was just that none of us wanted to do it. [Laughs] Even up until the day the script was released to the actors, it was midnight, and I was like, “Am I sure I’m gonna do this?” But I knew it was right. It’s a very complicated thing when you know it’s the right story but you personally don’t want to do it. 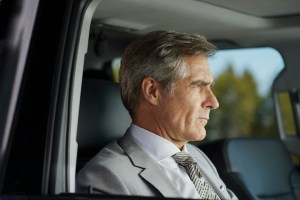 TVLINE | As a Revenge fan, I was psyched to see Henry Czerny in the car at the end of the episode. Do you have him for next season, as well?
We don’t have anybody for next season yet, beyond our regulars… We’re just dealing with that now. But I would love to have him back because in my mind that is, yes, a character that returns for sure. We are setting up the story for Season 2, and that character is important in that.

TVLINE | Alex and Ryan had a lot of relationship drama this season. Do you see more stability for them as a couple next season?
I would say that, in Season 2, everything slows down. The twists are still there, but… Season 1 was this you’re-on-the-run, fugitive thing, which is how it began, which is meant to be heart-pounding and fast, something that happened very quickly. We took our energy from that. Season 2 is structured a little bit slower. I’m not going to say what it is, but the nature of the event is slower and unfolding as opposed to explosive. We’re just going to take our energy from that. So all relationships will percolate and be slower. If The Fugitive was our Season 1 blockbuster, Season 2 is a different movie entirely.

TVLINE | Will we see the same level of flashbacks next season?
The thing I like about this show, which I think is different than other shows that use two different time periods, is that we have two separate stories running on parallel tracks that touch upon each other, as opposed to a one and done that you’re constantly flashing back to. So Season 2 will keep the two storyline structure, because it is — I wish I could tell you what it is, but I can’t — the Season 2 event is not a huge plot like I’m on the run and I’m being framed, which meant she was constantly on the move and constantly coming into people’s stories. It was two full stories on two tracks at all times. This one is one full story, and then one slow thing. It’s a cleaner build, that’s the best I can say. It will be less confusing.

Grade the episode via the poll below, then hit the comments to back up your choice!