NBC is turning to some sketch-comedy MVPs to boost its 2016-2017 schedule.

Wayans will star in and executive-produce his eponymous comedy, with the cast also including Essence Atkins (Are We There Yet?, Half & Half), Bresha Webb (Grey’s Anatomy), Diallo Riddle (Silicon Valley) and young newcomers Notlim Taylor and Amir O’Neil. Loosely inspired by Wayans’ own life, NBC describes the series as an “update to the classic family comedy centering on a loving (but immature) father committed to co-parenting his two kids with his very-together ex-wife. While his misguided fatherly advice, unstoppable larger-than-life personality and unpredictable Internet superstardom might get in the way sometimes, for Marlon family really always does come first — even if he’s the biggest kid of all.” 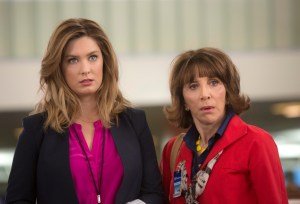 The logline for the series is as follows: “Getting along with some colleagues can be rough, but working with your mom? That’s a whole other story. When Katie (Heeland), an up-and-coming news producer, finds out her overbearing mom (Martin) has rejoined the workforce as an intern at the station where Katie works, it might just be the worst news ever. But, with her biggest cheerleader at her side, Katie might finally get the recognition she deserves.”

Will you tune in for Marlon or Great News? Sound off below!