NBC is officially back in the DC Comics business, having given a green light to the workplace comedy Powerless. Also on tap for the Peacock’s 2016-17 TV season is the fish-out-of-water comedy Trial & Error.

The first comedy series set in the universe of DC Comics, Powerless stars Vanessa Hudgens (Grease Live) as Emily, a spunky young insurance adjuster specializing in regular-people coverage against damage caused by the crime-fighting superheroes. When Emily stands up to one of these larger-than-life figures (after an epic battle messes with her commute), she accidentally becomes a cult “hero” in her own right… even if it’s just to her group of lovably quirky co-workers. 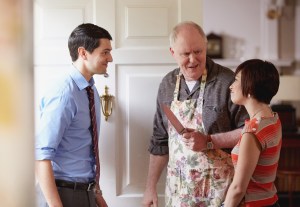 Josh Segal (Gotham‘s Nicholas D’Agosto), a bright-eyed New York lawyer who heads to a tiny Southern town for his first big case. His mission? To defend an eccentric, “rollercizing” poetry professor (3rd Rock‘s John Lithgow) accused of the bizarre murder of his beloved wife. Settling into a makeshift office behind a taxidermy shop and meeting his quirky team of local misfits, Josh suspects that winning his first big case will not be easy, especially when his client is always making himself look guilty.